5 Ways of Coping with Depression for Men 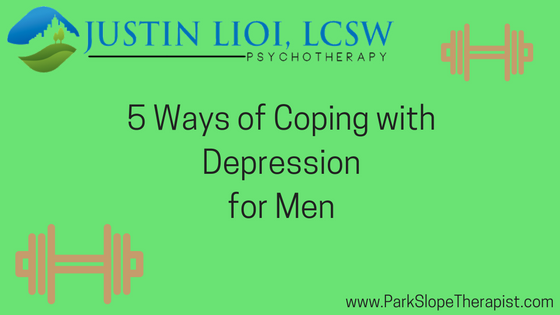 Coping with depression is not easy. It can be helpful to have a few skills to use when things get tough.

It’s important to note that these skills won’t be a cure. Plus, if you’re suffering from clinical major depression, the kind that majorly gets in the way of regular activities such as going to work, then a few skills for coping with depression probably won’t be enough and I’d suggest seeking out therapy to sort that out with someone who knows what they’re doing.

Coping skills are not the final treatment for anything. They’re what we pull out when we’re having a really bad day. When we find ourselves in a funk—maybe we know why or maybe we don’t—but we need a way to get through the tough times and coping skills are great for that.

Still, don’t think that I’m consider skills for coping with depression “band-aids” because that’s dismissive of how helpful and effective they can be. And I love coping skills.

We need them. Even if we conquer what ever we are going to treatment for, it’s good to have some coping skills for depression in our back pocket for any time it decides to rear its ugly head.

First off, it’s important to know that depression in men doesn’t always look like the images of depression we see on TV. Some common forms of male depression are

I write more about this in another post where I describe what makes the depressed man different, but the most important part is that you know yourself well enough to sense when you’re entering a dark place.

Maybe someone you care about senses this before you do. If you trust them, ask that they let you know when those signals so you can get used to noticing the early stages.

For example, your partner may notice you’re going into a funk when you start giving one-word answers or not wanting to go out a few nights in a row. Soon you’ll be able to notice that without having it pointed out, but early on, it could be helpful—if you’re able to hear it without getting defensive.

You may even be able to redirect those energies after a while and avoid the dark place altogether. In the meantime, focus on knowing yourself well enough to recognize the signs that you’re going to need to use some of the upcoming skills.

Once you are aware of your irritation, anger, needing to avoid—whatever your version of stress or depression is—the next step is to let it out. The earlier you sense this and the earlier you let it out, the better.

Many people feel that depression is rage turned inward. I use this because it makes depression more active than we usually think of it. Instead of the guy who can’t get out of bed it’s the pissed off guy punching out someone in a bar—except he’s often doing it to himself.

The idea now, though, is to let that rage out—but in a healthy way.

Anger is not bad. It’s the way we’re feeling. It’s gotten a bad reputation because it can be destructive and can cause a lot of hurt and pain toward others—and often toward the people we’re not really really angry at. How often do we displace our anger by deferring to our belittling boss, but come home and kick the dog? Over-drinking, gambling away your kids’ tuition, cheating on your partner—these are all ways of letting out that rage in ways that hurt other people and, eventually, hurts you.

5 Ways of Coping with Depression

So our 5 ways of coping with depression could also be called 5-ways-of-letting-out-what’s-inside-in-the-healthiest-way-possible.

These 5 skills for coping with depression can be done at the first sign of feeling down, and are probably easiest to do and most effective at that time. It’s hard to get in gear to do anything constructive when those feelings grab hold of you.

Let me know if they work and add your own in the comments below.

As always, if you’d like to talk more please don’t hesitate to get in contact with me for a free 15 minutes phone consultation.