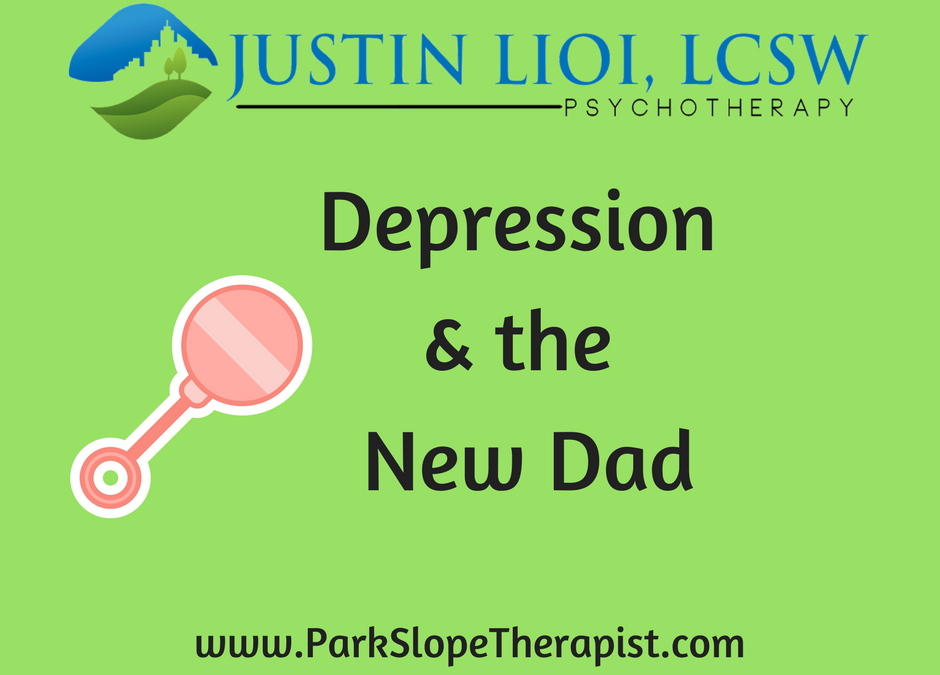 While men and dads don’t like to think about it, it’s true that many men get depressed (much more than report it). It’s difficult to take in.

It’s not something most of us want to be connected with. Anxiety is a bit better for some. It somehow feels more active to have anxiety. More “manly” some might say. Most of us are fine with saying we’re “stressed” (which isn’t really an emotion.)

As far as I’m concerned, we can call it whatever you want. Just as long as we don’t ignore it.

Because that’s what many of us—many of us men—do. “Nothing to see here, just keep it moving.”

It just doesn’t work. Even if we think it’s working, the energy put forth to hold back these feelings is chipping away at you. It might be a slow burn. You can just push it back so many times before you explode over something relatively minor (and morning commutes are enough to gives us plenty of excuses to explode) or something big comes along and you just can’t hold it in anymore and the proverbial straw breaks your camel-like back.

And then you’re no good to anyone.

Subtle Signs of Depression for Dads

Because that’s the thing. We hold all this stuff in so that we can be what David & Brannon call the “sturdy oak” for our partner, for our children, for our family.

But if this means that you end up dying early because of what’s been wreaking havoc inside of you or that you become so dependent on some type of avoidant behavior (could be work, could be Game of Thrones, could be alcohol or other drugs) then your oak is destroyed from the roots up.

We may think we are present—and maybe we physically are—but our families need more.

When speaking with new fathers I talk about these three surprising signs that they may be depressed:

We’ve already hit on each of these above and they’re important to look out for. Maybe they were present before Junior came along, maybe not, but they are common ways that fathers are showing symptoms of what we’re just going to go ahead and call ‘depression.’

But this isn’t just about you.

How Your Depression Affects Your Family

Depression affects your child—even your unborn one

Although it’s very American to be self-reliant and to shoulder one’s burden oneself, in truth, who and how we are, and how we manage emotions, affects other people. If you’re a guy who’s in a relationship—and we’re not even talking about the stork yet—your mental well-being plays a role in the well-being of your partner.

You may not want it to.

But let’s go further. A study from 2016 that found that a guy’s depression during the 12 months prior to conception can be linked with a negative sperm quality and placenta functioning. A dad-to-be’s depression is even linked to premature birth.1

For better or for worse, you’re not an island. And no matter how good you are at hiding your feelings—and believe me, I’ve worked with some of the best—your child, even your unborn one, is on to you.

And they are reaping the effects of your reluctance to seek support.

Because, there is help out there. Sure, counseling is great—it’s a space away from your partner so you can feel free to vent about all the stuff you feel you have to hide from the person who’s carried (or is carrying) your child—but take an honest look at other spaces in your life because being able to honestly and deeply connect with others is going to help.

Once your child is here there’s no more hiding. You may think you’re holding something back, but eventually it’s going to bite you—children have a remarkable way of finding what you want to hide—or thought you “conquered.” Kids will only understand that there’s something bothering Daddy and they’ll just assume that it’s about them. They’ll end up feeling they’re the cause of whatever it is that you’re going through. That’s a burden you don’t have to give them!

And speaking of burdens…or stress…or, yes, depression. This is something you don’t have to shoulder, and you certainly don’t have to do it on your own. Be on the lookout for the 3 signs of avoidance, irritation, and aggression and don’t hesitate to seek out support so you can start working on this before it’s your turn to chaperone the senior prom and the empty nest is looming.

This post originally appeared in on MommyBites.com It’s been edited and can be found in its original version here.