The COVID-19 crisis only increases stress and depressive symptoms.

Of course, you knew that, but it’s important for us not to beat ourselves up for feeling overwhelmed when we’re struggling to manage with what is an undoubtably uncertain time. And uncertainty is a difficult state for most of us.

Some questions you may be asking yourself:

Will my family get sick?How do I protect my parents, my partner, my kids?Will I get sick and what happens to my family if I do?Will there be treatment? Hospital beds? Ventilators?

Plus, even if you are sheltering in place at home, being with family 24/7 can bring up a lot of STRESS.

It’s to be expected.

Supporting you in managing your stress and depression through Online Counseling is a way I can help.

Please contact me with any questions or concerns you have and we can have a phone/online consultation so you can see if online counseling would be a good fit for you during these challenging times.

Depression has a strong stigma, and depression in men, even more so.

The stigma around mental illness makes me nutty. It gets me so angry. I just…it’s such an enormous barrier for people to get help.

Men in particular are already reluctant to seek help for anything. Ther 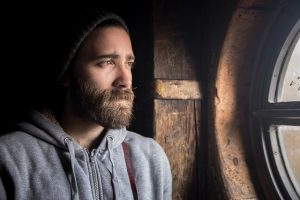 e was even a “Take Your Man to the Doctor” program in Brooklyn years back so it’s clear that this isn’t just a mental health stigma–there is something very difficult for many men when it comes to asking for help.

Sure, we can take a look at the cycle. Boy grows up seeing dad not ask for help or show emotion, Dad didn’t see his dad express emotions…etc etc etc.

It really gets in the mainstream, though.

Can you imagine what this statistic could be if men sought help when they needed it?

Listen, diagnosing is whatever it is. Insurance companies use them to reimburse, researchers use them so they can clarify a problem, but many therapists don’t need a client to accept the label of the dreaded “D” word: depression. We just want more men to feel better and take ownership and responsibility for doing so.

Therapy isn’t the only way, but it is a really effective one. It’s a radical act for many guys and takes a boatload of courage since some of us are told from birth not to be a cry-baby (even when we were literally babies who are crying!) Confronting the emotional expression that holds men back is necessary, with or without therapy.

Still, I want to talk here about what I mean when I’m talking about depression in men.

Depression in Men: What Makes the Depressed Man Different?

It’s very likely you imagined a woman. But even if it were a man you probably saw them in bed in a dark room with a big frown on their face. Maybe it was more of a look of total misery. Maybe they were crying.

It’s what the media shows us. Commercials for anti-depressants use colors like grays and blues. The person in the ad is probably alone.

It’s a depressing sense of depression. In some ways it’s accurate. There are a lot of people who experience their depression in just that way. Debilitating. Inconsolable. Lonely.

Depression in men is often experienced differently, even the paternal post partum depression for new fathers looks different than PPD in mothers. Even if they feel all those things, they don’t present in the ‘classically depressed’ fashion.

It can look like any of these things. Not in the DSM-5 perhaps, but it’s depression because there is a focus on what the man has or hasn’t done. There’s a degrading of self and what he should be doing, or should have done by now. Maybe that’s family, maybe it’s work–it’s often a combination of taking all the definitions of who he should be that he’s heard over the years and feeling he just doesn’t measure up.

He’d rather hit the bar after work than face his family. He’d rather do anything than say out loud: “This sucks and it’s not working for me and I need help to get on the right track!”

Men’s groups are so powerful because guys see first hand, not just because a counselor tells them, that other guys–other Men–are dealing with the same doubts and shames. The same feelings of failure. The same sense that they aren’t the men their fathers were, or the men they wanted to be. The same “shoulds.”

We’re going to still call this depression in men until someone comes up with a better word for it.

You may still get out of bed every morning, go to work, put a smile on for the kids when you get home, show up at the events–and still be depressed.

There’s room for more joy in there if you’re open to it–even if that seems impossible.

You may not be as stuck as you think you are–another symptom of depression in men: believing you’re stuck and that’s that. It’s why mid life crises are “popular”–they come at the point when the man says, “Actually, I do have a choice! I can have that affair. I can buy that car. I can do the extreme opposite of what my life is.” It’s also why mid-life crises are so destructive: they run to the extreme toward someone you think you might want to be.

There are other options.

Depression in men looks different than what we usually think of as depression, but it’s just as damaging. But there is hope and there is a way out. If you’d like to talk more about this, please contact me and we can set up a 20-minute phone consultation to see if counseling could be beneficial.

What others are saying

"Justin has just the right blend of intellect and sensitivity to lead you to the insights you want, while giving you the safety and reassurance you need to get there." Bibi Boynton, LCSW, Child Therapist
"I have known Justin Lioi in a professional and personal capacity for the past 7 years. In that time he has only exhibited the utmost compassion not only for his friends and family but also for his patients and colleagues. He is a highly skilled psychotherapist who is warm and engaging." Kate Casazza, LMSW, Medical Social Worker
"I never hesitate in sending referrals to Justin because he ensures that he is tuned into whoever walks into his office. I’ve had the opportunity to observe Justin first hand as we worked together with a client in the past. He is impressive, a good listener and flexible in matching his approach with the person." Eve Rentzer, LCSW-R