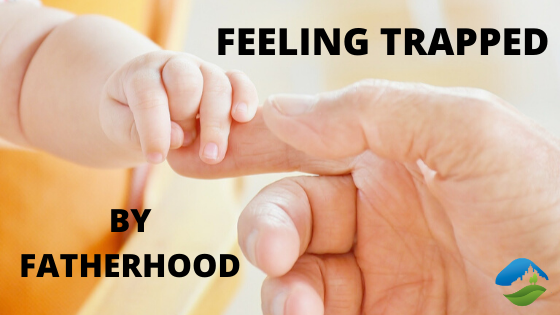 There are basically two acceptable feelings regarding children:

1. “I am ecstatically happy! This is the greatest thing that has ever happened to me! What a blessing!”

2. “It’s so hard, so hard. I never sleep anymore. This is the most difficult job ever!”

Well, you can say the latter if you quickly accompany it with a qualified, “But it’s the greatest thing ever. I just look at my child and it all goes away.”

Those are both socially acceptable. We see it on TV, we hear it from our friends.

But we may feel something else. We might be feeling trapped by fatherhood.

Everyone asks how the baby is and, that’s quickly followed up with a “How’s mom doing?”

It’s much rarer that others get around to asking about you. (And usually only to make sure that you’re doing everything you can to take care of mom and the baby.)

What doesn’t get talked about? No one seriously talks about what it’s like to realize you’re not going to be having sex for a while and that when you do, it might be difficult to see your partner as sexual—particularly if you were present for and happened to witness the very non-sexual moment of birth. No one seriously asks you if you’re feeling trapped.

What else isn’t talked about with the seriousness it deserves?

If you’re like most fathers that aren’t having the “acceptable” reactions to being a new dad, you might not even be aware of having the above “negative” feelings or feeling trapped. You might just find yourself engaging in avoidant activities.

Like, maybe you suddenly discover you have to work later than you used to: “It’s not my fault, hon, we’re just really busy right now.”

If you take some time for yourself you might find that you’re lingering longer than you need to while trying to not feel annoyed by the third degree you’re expecting to get when you do walk in the door (whether it actually comes or not is another story—but you’re expecting it. You’re feeling guilty about it. You’re even resenting it—and it may never happen.)

Or maybe you find yourself drinking a bit more wine with dinner or smoking more tobacco or marijuana.

All of these are ways to distance yourself from those unacceptable feelings you desperately don’t want to admit—even to yourself—that you’re having.

Because others will look down on you, or worse, they’ll dismiss your feelings by telling you to get over it, nullifying your experience. Sadly, that’s often the response when men (finally) express a vulnerable feeling.

So, basically, you’re avoiding feelings that you’re ashamed to have while avoiding being shamed by others for having them.

If it were socially acceptable for men to do cartwheels, men would do cartwheels to avoid shame—even when a baby isn’t the catalyst for that particular vulnerability.

There’s good news, though. You see, these feelings, including feeling trapped, don’t mean that you’re nuts, or crazy, or even that you’re a bad dad. They in no means indicate that you should not have been, shouldn’t have attempted to be, or have no business being a father.

This may be difficult to take in and to really believe, but there’s nothing inherently wrong with these feelings.

And we don’t get to control our feelings and emotions. We don’t decide to feel happy, scared, angry, or relieved. Or shame.

We just are any of those things at any given time.

So, honestly, the first step to moving through this discomfort is to become aware of it and accept that that’s how you’re feeling right now.

And that may be enough for you. Stop the energy flowing from trying to not feel guilty or scared and you might discover that you can move through those feelings to become better at meal times. Maybe even enjoying them!

Maybe you need to express these feelings out loud to someone. But be aware that this person may not be your partner. I’m not saying they’re not the right person, but you know them better than I do. Are they able to hear this just yet? Maybe start with a good friend—someone who won’t shut you down or tell you to “get over it.” Maybe it’s a parent of yours—who might just let you know that you weren’t a bundle of roses at four months either.

And it’s possible that you might want to seek some professional counsel. Not because you’re “crazy” or have some mental illness, but because therapists have heard this before—they’ve explored this with other fathers and can support you through it.

The important part of all of this is acceptance.

Not to accept that you’re “stuck” in this role as father and not to accept it and act on it. It’s to accept all your feelings as just that: feelings. To know that they will come and go.

Accepting them means they won’t end up controlling you and preventing you from becoming the father you want to be.

This post was originally published at The Motherhood Center.

Still worried about what you’re going through or want to talk a bit to see if counseling could help. Please get in touch with me for a free 15/20 minute consultation.

Justin Lioi, LCSW is a men’s mental health and relationship expert based in Brooklyn, NY (and online throughout New York State and internationally.) He received his degree from New York University and has been working in family and men’s counseling for over 10 years. Justin writes a weekly column for the Good Men Project called Unmasking Masculinity and can be found on local and national podcasts talking about assertiveness, anger, self-compassion.