Going Out Alone: The Public Display of Being By Yourself - Justin Lioi, LCSW - Brooklyn, NY

Going Out Alone: The Public Display of Being By Yourself

How comfortable are you with going out alone? Can you go to dinner by yourself? Buy a single movie ticket? If you are, are there certain times that you’re more likely to try this? Whether it’s a desire for friendship or a romantic relationship there are many people who struggle with the public display of being by themselves.

At least in Brooklyn it’s not uncommon to see people going out alone and parking themselves in front of a laptop while downing a few lattes–for some it’s their office away from their home (office) and that’s okay to most people because they are there with a purpose. They are going out alone in order to work. Some coffee shops, like Konditori, even have large tables so various strangers can work together (although, I seem to only ever get a space in the back.) There’s no talking, rarely do I observe any flirting: it’s business.

Bars tell a different story. It’s possible to see one or two people sitting at the bar with a paperback, The New Yorker or their Kindle. Sometimes there’s even a teacher grading papers while having a margarita (I doubt the nuns growing up were doing that for me). People do work in bars too.

It’s always exciting to see someone sitting at a bar, in a coffee shop–on a bench even–sitting and doing nothing. Not texting to see how many more minutes their friend is going to make them wait. Not checking email, not reading a book, not doing any of the things that signal to other people: I’m TOTALLY fine being here on my own so keep it moving, buster.

What’s so difficult about being by yourself in public?

Judgment of Others v. Self-judgment

When you are out with some friends, laughing and enjoying the Friday night, and someone is sitting on a stool—what pops into your head? Most people, if they even notice, think very little about that person. If they are happy with their night they’re not judging someone else’s. When they do think about that person I’ve heard two feelings come up again and again: envy is one and compassion is the other.

For those of us for whom sitting alone is uncomfortable it can be bring up some jealousy that someone can be that brave. They know they would rather sit home and watch How I Met Your Mother on Netflix than announce their lack of companionship (nothing against HIMYM, but let’s face it, you’ve watched every episode.) Seeing someone do what they would never even consider doing is awe-inspiring. That person might even gain a little bit of strength and think about doing it themselves.

Others who equate being alone with loneliness may initially be glad they are amongst people…but then, from what I hear, compassion kicks in. Even if it’s unwanted—that person sitting by themselves could very well have turned down two dates, a party, and tickets to Wicked just to be able to have an overpriced, but delicious, cortado (ok, probably not Wicked, but maybe they turned down Mama Mia!)

What I’m getting at here is twofold. One (which is the subject for a future post), is that we never know what others are motivated by just by looking and we often place our own “stuff” on them. Two (which is more apropos today), rarely do we think, “Wow, what a total loser, they must be mean to people and really bad in bed!” Yet, be honest, is that what you think others are thinking if you are sitting by yourself somewhere? Most people judge how they are being judged much, much worse than how others are actually judging them. (Read that again, I tried to simplify the sentence, but couldn’t do it.) It’s cool to say, “Oh, I don’t care about others opinions,” and, believe me, it is worth taking a good hard look at how often we let peer pressure get in our way, but it might be a little less time consuming to examine why you choose to treat yourself worse than you treat them.

Being Aware of the Feeling

When someone goes out with a goal, begins working on the goal and leaves knowing the goal was accomplished, it’s more likely that their “stuff” won’t get in the way. What I mean is, if you go to the cafe to read a book and you sit and read the book and ninety minutes later you leave having read a few chapters, then you may not be as hyper-aware of who’s not talking to you while you’re sitting and reading the book. 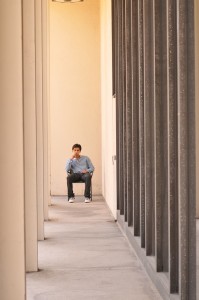 If you are headed to the cafe because you’re lonely and you want to engage with other people, but you’re hoping they are going to make the first move because you’re shy and you know you’d like to make friends, but you don’t want anyone to pick you up although if they are really cool, maybe it would be okay…Take a breath. That’s a lot of pressure you’re putting on yourself. First, pat yourself on the back for being aware–it may not feel great at first, but it’s a big initial step. (Many people head to the cafe with the book saying they just want to read, but really they want all the other stuff as well and aren’t admitting it to themselves. That recipe yields sadness and failure.)

Remember wanting to socialize and meet people while being by yourself is not a bad reason for going to a public place to hang out. There are a couple of things to remember, though: A lot of this is not in your control. You don’t know whose going to be at the place, whether they’ll be interesting, whether they will be shy (or whether they just want to read their book.) Here are some things you can try now:

Tips for Going Out Alone

If these suggestions are filling you with panic, don’t despair. If you haven’t already, feel free to download my e-book about making friends in NYC. If you’d like to talk about your situation even further, don’t hesitate to send me a message.