[VIDEO] How NOT to React When Your Inner Patriarch is Exposed - Justin Lioi, LCSW - Brooklyn, NY

[VIDEO] How NOT to React When Your Inner Patriarch is Exposed 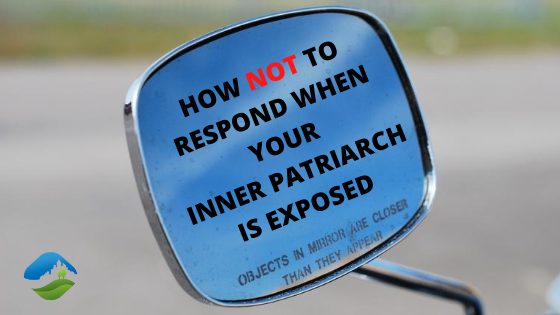 To get through grad school, everyone had to take a Social Work with Groups class which is basically a class on group therapy. Sometimes these classes are taught as if all the students were in group therapy with the teacher as the therapist.

Social work is its own thing.

There are pros and cons to this, but it’s how my class was taught way back in the mid 2000s. We had class in the basement of the Social Work building at NYU. NYU large beautiful school, lots of money poured in, right? Well, the SW school doesn’t get as much of that as the law school as you can imagine. So we are in the basement that social workers, ever the geniuses at reframing things, refer to as the garden level.

There was no garden.

It was a windowless, green and light brown room filled with 30 students and a teacher sitting in a circle. (Social workers only know how to sit in circles.) Of course, due to the oblong-ness of the room and the amount of us, it was more of a frumpy oval. We had those desks where the chair and desk are built in with each other. This just meant that it was impossible to keep a textbook, notebook or laptop on the small sliver of surface area. And we were discussing competition.

Being Exposed Can Feel Shameful

In groups, competition is almost always present, even if it’s under the guise of how polite and gracious we all are. There’s still a concern about:

It’s a family, it’s a society, it’s all that—except when you’re in group therapy you talk about all the things you don’t say around the dinner table.

I had been loving school up to this point. I loved learning how to intellectualize all the things that I grew up with—any issues I had, I was able to give fancy sounding names to.

I’d been in therapy for a while at that point as well so it was great to see things from the other side of the chair.

What groups class did to me was only what art had done to me before—caught me unawares and exposed something I did not want to see. As we go around the room discussing competition and where it shows up, how it shows up, I take the opportunity to talk about how I rarely felt competitive in this particular class.

My reasoning for this was because there were only two guys in the room and at the time, that made me more comfortable. (Also he was pretty quiet and I ask a lot of questions and can be somewhat of a class clown. Or at least I don’t hesitate to say something I think is witty.)

You see, in this moment, I thought I was just revealing something about myself: that I was aware of a need to learn to feel more comfortable with men and groups of men. I was thinking about growing up and never really taking to the all boys prep school I went to, or sports, or Boy Scouts. I liked being in more mixed groups—I did a lot of theater.

Defensiveness Can Stop You From Growing

A number of the women in the room heard something that I did not intend:

That certainly was not what I meant at all, but suddenly half the class was expressing anger and how insulted they felt.

But I thought I was sharing my vulnerability, I thought I should be being praised for that. I didn’t think I should have to manage unintended consequences.

For the first time in years, I thought I was going to cry. My breathing changed. I was actually panicking. I could not control how I was being heard or seen, I couldn’t change the narrative by saying something funny. People I liked and respected were letting me know that what I said was insulting to them. And I couldn’t handle that. If Twitter were a thing at the time I would have said #NotAllMen

I was feeling scared which I don’t like to feel. What I was panicking about was that I was going to be (in modern day terms) canceled. And that scared me more than anything.

So, here was my chance to hear what others said. To listen to the responses and learn. To allow my self to feel really bad as a way toward self-examination. Did I take the opportunity to do that? No.

I tried to explain.

Nothing helped. Nothing, until a woman who was sitting next to me came to my defense. She spoke about me as a friend and as a colleague and suddenly I could swallow those tears, I could regain composure. I could be the old me again. Shame being stuffed back. After class many colleagues who I’d known for a while came up to tell me, in different ways, that I was OK. I hadn’t upset them. They didn’t think differently of me.

At the time, I saw this as a great learning experience. Wow, therapy could get underneath all that intellectualizing and unlock some parts of me that I didn’t even realize were stored. And that was true. But that was only focusing and centering me and my experience.

What I did not understand at the time, and what would take years to begin to really unravel is just how toxic masculinity and patriarchy were so entwined in this.

Moving from Centering “ME” to the Larger Picture

I had no idea, none, that what I was saying was that I felt less threatened by the women in the class. I was admitting to a lot of fear of competition with men and a lack of self-esteem about my own maleness and masculinity. Which was good because that’s something I directly took on to work on.

But I was so hurt and scared—we call it fragile now—when I was called out for what else was underneath that. And I didn’t feel better until women were able to massage my male ego. It’s how Terrence Real, therapist and author of “I Don’t Want to Talk About It”—one of the first books on male depression—describes ‘psychological patriarchy’: I held myself separately from the women and while thinking I was considering everyone else as equal, clearly there was a part of me that was not.

And where do women learn to “protect the patriarchy” by not letting me just sit with how shitty I felt? Where did I learn to hold myself apart from women—it wasn’t directly taught. Terry Real calls these two things The Dance of Contempt & The Core Collusion.

This is one of those moments in life that I wish never happened, but I doubt I would have learned anything if I had just read about this or witnessed it in someone else. But between therapy, becoming more self-reflective, and having both men and women and non-cis people hold me accountable has all been very important to my growth.

It’s what sucks about therapy and life, really. You can’t just prepare for it all in our heads. We have to make a lot of mistakes, they need to be with other people, and we have to be willing to feel what comes up, maybe it’s shame, guilt, fear, anger, whatever. We need to be able to learn to move through that without explaining. Without getting defensive. That takes a strong sense of yourself and a willingness to work to change.

I wasn’t there back then, but I hope I’m better at showing up and owning when I get it wrong now.

If you’d like to explore your own growth and pushing back on defensiveness to find out what’s underneath, please contact me for a free consultation.

Justin Lioi, LCSW is a men’s mental health and relationship expert based in Brooklyn, NY (and online throughout New York State and internationally.) He received his degree from New York University and has been working with men and their families for over 10 years. Justin writes a weekly column for the Good Men Project called Unmasking Masculinity and can be found on local and national podcasts talking about assertiveness, anger, self-compassion. He works with all men but has a particular focus on providing counseling for fathers (and guys hoping to become dads!)