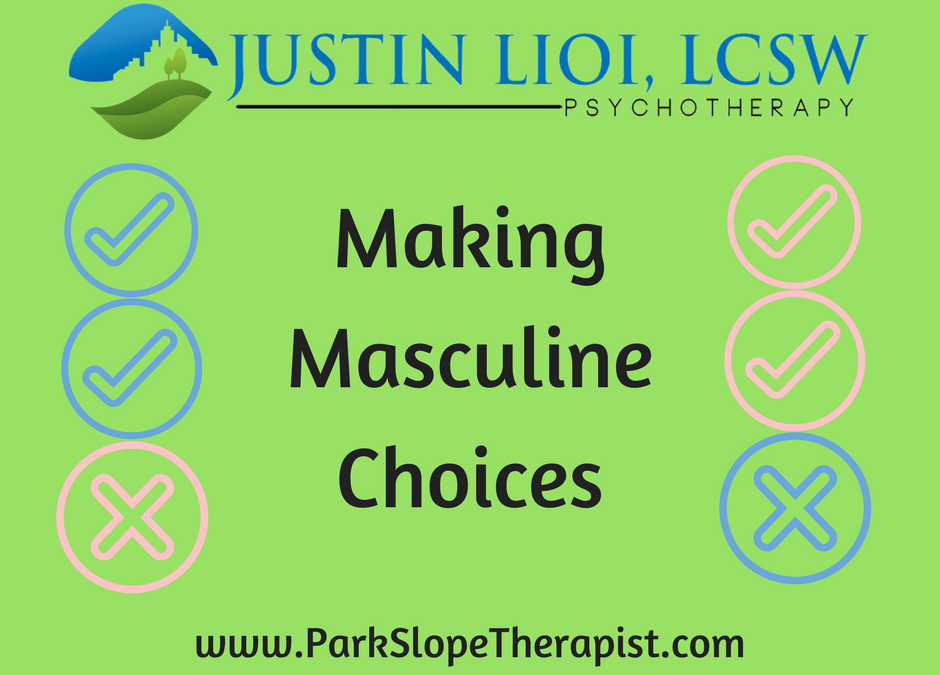 Grayson Perry writes at length in The Descent of Man about how stifling masculinity can be. He describes it as providing a default setting for how a man is supposed to act. The patriarchy then provides us lucky men with a host of privileges—and it hopes that we won’t notice that the small price we pay for all this is that we are stopped from being ourselves.

If by “being ourselves” means that we totally jive with what the Default Man setting is, then we’re one of the few genuinely happy ones. We’re in the club and the club was built for us.

But if we stray just a little—or if deep down we want to stray from the default setting, well, the patriarchy cures that by sending us a good dose of shame. Which is bad enough when we turn it inward and lower our self-esteem—it keeps us quiet and the patriarchy is ok with that—bit it would prefer we use all those male privileges to go in the other direction and over-compensate.

So our choices are:

1. Be totally happy with fulfilling the Masculine Default Man Setting

2. Feel really bad that you don’t fulfill the MDMS and become a depressed man (aka become passive, sad, maybe even “feminized” (whatever that means))

3. Find the parts of you that don’t match up to the MDMS and overdevelop them:

Don’t just get in shape, bulk up.

Most of all, spend lots of time and energy making sure people know you’re

a) not a woman and

Number 3 is really the patriarchy’s favorite. You are fully controlled at that point and who you actually are gets buried. Red pill, indeed. It’s a trap, it’s a lie, and it’s dangerous.

The mass of American men live lives somewhere in number 3. Even the depressed men usually try to overcompensate somewhere.

And we’re killing ourselves. Literally—the suicide rate for men is 3.5x more often than that of women. 7 out of 10 suicides in 2015 were white men.

So here’s what I’d like you to do. Take a few minutes and imagine what the MDMS is for you. Close your eyes and see what images get conjured up.

Ok, now take an honest look at yourself and consider where you move away from who you are to compensate to be more like that MDMS—even if it’s just a little.

Maybe it seems like you don’t put a whole lot of effort into this, but any energy spent in that direction is energy moving away from your dreams, your desires, and your sense of who you are.

And there’s enough BS in the world that already gets in our way.

So ask yourself, is it worth it?

This article was originally published on The Good Men Project.