10 Ways Men’s Counseling Can Help YOU (Part I) 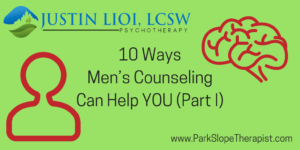 I hear a lot of things that guys want to have different in their lives, but often men and counseling don’t seem to go together. It’s as if counseling is not considered as an option to get there.

I want to push back on the stigma against counseling for men and talk about how it could be helpful.

I also want to counter the idea that you need a mental health diagnosis to go to therapy. While some people are comforted knowing they are struggling with something that is common and defined (at least by the DSM—the Diagnostic and Statistical Manual of Mental Disorders) many people go to great lengths to avoid seeing a therapist because of this untrue belief that you must have a diagnosable condition in order to get some support (Although, it is still true that if insurance is involved a diagnosis is required in order to get reimbursement).

So when putting together men and counseling a lot of the guys I work with are trying to get help with different types of transitions:

Many want a relationship or are feeling down or anxious a lot for no understandable reason.

The bulk of people seeking and who are in therapy are doing so to get “unstuck”. You can learn to work with the part of who you are that keeps holding you back from who you want to be. That’s what men and counseling are all about.

Here are a number of reasons working with a counselor can support you in some bona fide, concrete issues (I’m promising 10, but I’m going to roll these out 3 at a time. Stay tuned…)

Making friends as an adult can be an overwhelming and shaming experience. After all, this is something you’re supposed to have figured out by now–or so you think.

Well, the truth is, you probably have more skill at this than you realize, especially if at some point in your life you’ve made a connection with anyone. A common dynamic I see are men whose friendships are all through their girlfriends or wives. It’s not unusual for me to hear from a woman who’s trying to get her boyfriend to hang out with her friend’s boyfriend and to do it without the girlfriends.

In my ebook “Learning to Connect” I give some concrete methods to making friends as an adult (often it’s about finding people with shared interests. There’s a MeetUp group for just about anything!) But in session we look at some of the messier stuff that gets in the way of getting to the MeetUp and what to do once you’re there. The embarrassment in the situation, the irritation of dealing with certain people, the desire to just stay home. My job is to challenge all this and experiment with new thoughts and new actions to help you feel more comfortable obtaining and maintaining your own friendships.

And being that counseling is confidential, no one needs to know what it takes for you to get to that place.

2. Finding Happiness in Relationships (if you’re already in one)

Couples counseling can be awesome. It’s a great way to really take a good look at your relationship, decide if you’re headed in the same direction, and figure out how to keep going there.

Individual counseling while you’re a part of a couple is a different dynamic. There’s a probably a bunch of junk you need to sort out before talking with your partner about it. Or maybe they’ve heard it just too many times. I’m not saying it’s a place specifically to keep secrets from them, but you can use it to test out big decisions (to marry or not to marry, for one example) and to take a step back from your own judgment to see just how you’re making decisions.

This isn’t meant to be another nail in your coffin with you being told that you’re the problem and you need therapy to fix things. We look at what gets in the way of you asking for what you want—and if you already do that, but unsuccessfully, we examine why it’s not working.

Maybe you’d like to be having more sex. Maybe you’re feeling smothered and want some individual time. Maybe you’re feeling pressure to make big relationship decisions that you’re not ready for (i.e., moving in, getting engaged, having a baby) and you want to take a look at that decision-process without your partner listening in. Counseling encourages you to sift through your well-established patterns that can feel under attack once you’re a part of a couple.

3. Finding Happiness in Relationships (if you want one, but aren’t currently in one)

Being and feeling alone is very common. Its worst symptom is that because you feel alone and think you’re the only one you’re oblivious to how many people feel exactly the same way. Funny that, huh?

There are so many dynamics to dating these days. The online world has made it easier and harder. Ghosting is a new word in our vocabulary and it’s a symptom of how easy it is to meet someone new and how easy it is to disappear. Unless you really want to, you never have to learn to sit with the discomfort of getting to know someone new—with all their plusses and minuses. You see one negative trait and you can jet. It’s likely you’ll never run into each other again (although you never know in this city…)

And others can do the same which leaves a lot of people feeling unloveable and hyper fixated on some perceived minor flaw that the right person would find attractive.

There’s a lot of confidence issues when it comes to dating.There are also struggles with feeling good about yourself when you’re not part of a couple which, if worked on, can lead to projecting more confidence, which can lead to becoming part of a couple. Counseling can fit into all of those spaces along the way.

With this series I bring together a number of topics that I’ve written about elsewhere on the site to show how effective and helpful counseling can be apart from some of the “traditional” reasons people seek therapy. Because even when you do have a depression or PTSD diagnosis it doesn’t mean that all these other issues aren’t in play as well. Relationships, loneliness, transitions…these are universal concerns that counseling is made for.

Ready for the next few reasons? Check out Part II of How Men’s Counseling Can Help YOU!

If you’d like to read further about counseling for men please check out the link here. If you’re interested in talking further and seeing if counseling is for you, contact me to schedule a free 15-minute phone consultation.