"The Suffering Is Optional": Why Are Men Resistant to Therapy? - Justin Lioi, LCSW - Brooklyn, NY

“The Suffering Is Optional”: Why Are Men Resistant to Therapy? 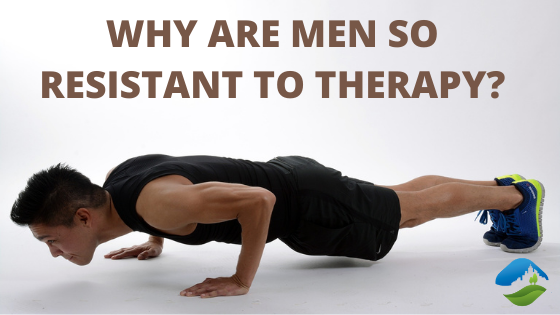 The question “Why are men resistant to therapy?” often comes from women and it’s usually in the context of a man they love who needs some help. Maybe it’s help they’ve been trying to offer. Or maybe they’ve been resisting becoming the de facto therapist for their boyfriend, husband, buddy, or son (or brother, co-worker, the list goes on…)

I’m trying to think if a man has ever asked me this (other than Sam Blum whose article I’ll be referencing throughout this post) and I really can’t remember. I can certainly give you my own reasons for avoiding therapy at different stages in my life when it would have been helpful:

And all of those are valid reasons. But they led to my putting off seeking support that eventually helped me quite a bit. That’s not to say I didn’t have to face all those things: being embarrassed, worried, finding the cash, etc. It was actually the facing all those things that actually was the most helpful in stopping being so worried about how others thought about me.

A Confession from One of the Men Resistant to Therapy: Me

Here’s a secret, while I’ve been in therapy as a kid and as an adult, some of these reasons were still there when I was seeking my own therapy after I became a therapist!

The way it works is that issues have less and less hold on you. Sure, they may pop back up again at challenging times in our lives–but with less intensity, and it actually gives us a chance to realize how much we’ve grown. Overcoming that resistance (such as: “I’m a therapist, I know all this”) was much quicker when I realized (and maybe an insightful friend who also happened to be a therapist pointed out to me) that I needed to get out of my own way.

So when Sam asked me these same questions about why men are resistant to therapy, I could call up issues that i hear from people who want to help a guy they love, and I could also reach back and remember what it was like to break through that wall myself.

Imagine that idea, though, take it in.

The hard work to get through suffering, unfortunately, isn’t optional, but wouldn’t it be better to have gotten through it?

You won’t be alone though, and you’ll have a guide who’s been there before with others and–yes, you’re allowed to ask–has most likely been there themself.

So take a read of Sam’s article and let me know if you’re interested in exploring some of your own “stuff”. I offer a free phone consultation to see if we’d be a good fit and can answer more specific questions about you at that time.

Justin Lioi, LCSW is a men’s mental health and relationship expert. He is a Brooklyn therapist (as well as also seeing clients online throughout New York State and internationally.) He received his degree from New York University and has been working with men and their families for over 10 years. Justin writes a weekly column for the Good Men Project called Unmasking Masculinity and can be found on local and national podcasts talking about assertiveness, anger, self-compassion.