Where Do Parents Unrealistic Expectations Stem From?

The word ‘expectation’ isn’t used as much as it used to be. Now we hear about assessments and testing, rules and outcomes. But what all those things point to are what we expect our kids to know and then what to do with that knowledge. Kimanzi Constable makes a good case for what he considers to be parents unrealistic expectations in his article on the Good Men Project (and it seems he actually asked his boys about it and they agreed, although they would have made the list longer. Ha!) Fathers can place a lot of expectations on their kids and the article is a good jumping off point to make your own self-assessment.

What are expectations all about, though? What’s the point of having them?

Raise the Bar and They Will Meet the Bar

Having high expectations for someone can give the message that you believe they can do better than they are doing. It can set a high standard for someone who may not realize they could reach it if left to themselves.

In theory, great. Have a high bar and people will reach it—as long as you’ve made the correct assessment that they have the aptitude to do so.

Often in the helping professions we’re accused of the opposite: having too low of standards and rushing in to help. This can end up actually disempowering someone by giving the message that I, the expert, must do this for you. It’s like when a therapist gives too much advice and gets in the way of a client’s actual growth.

A few years back a friend of mine pointed this tendency out in me. We were walking around the Audubon House in Prospect Park and a young boy was struggling with getting his bicycle onto the deck over a bump in the road. I asked if he needed some help and without waiting for an answer I picked the bike up and set it back down on the deck for him. My friend said I was taking control away from this kid and, perhaps, taking away his experience of struggling and succeeding at something. I thought he had a good point.

So where is the line? It could be hard to tell, because the other side of things is what Constable talks about more in his article. Helicopter parenting aside, it is possible to place too much pressure on a kid.

There can be a fine line between parents unrealistic expectations and letting your kids get away with too much.

I often see the extremes in my office. I see the dad who, no matter what their child does, just laughs and shrugs while relating the story of how much worse he did was when he was his kid’s age. On the other side there’s the righteous indignation of every little infraction which can be just as unhelpful.

Both remove the lesson from parenting—and I’ll use this as a touchstone all the time when talking about discipline.

Are you punishing or are you teaching?

The first step can be, as Constable says, “to remember what it was like at that age, and not make every incident a nuclear explosion,” but also to not let him get away with everything because “boys will be boys.”

Number four on Constable’s list is a big one for me, and it’s a refrain I often hear, usually in the first session with parents: “He should be grateful…”

I have a lot to say about parents unrealistic expectations of gratitude and how it leads to parental resentment and stymieing of the child, but I’m going to hold off for another post. For now I just want to comment on how the expectation of gratitude sets up a dynamic where your child is acting in order to please you or to make you happy.

As nice as that sounds at first, it’s not your son’s job to do that. Cultivating an “attitude of gratitude” is a terrific practice, and I’m not saying that you shouldn’t teach your kid to say “Thank you.” But expecting him to be grateful to you for everything is going to make you upset during the (many) times that he doesn’t. He’s kind of busy developing a personality and becoming an individual—which is his job, especially as he gets into his teens (which is when I most often hear the parents complaining about the ungratefulness.)

Parents unrealistic expectation of gratitude from sons will mean that you’ll like your job less, I promise. And those moments when he does express it (like if and when he has his own son) will be well earned and treasured.

Are Your Expectations Your’s or Someone Else’s? 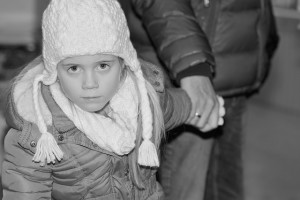 More important than anything is making sure that your expectations are thought out and challenged. Many people parent without realizing they are making the same decisions their parents did, just because. Or, the opposite, they are parenting in reaction to their parents and do the opposite of everything their parents did. Neither of those methods takes into consideration how you want to parent and what your particular son needs. Many parents’ unrealistic expectations are not even actually theirs!

Are the expectations you have just what you’ve assumed because that’s what was expected of you? Maybe you were given too much responsibility as a child because of circumstances and you’re replicating that without thinking about it. Maybe so little was expected of you and you were cared for by everyone (any youngest son of many sisters out there?) and you feel the same should be done for Junior.

Examine what you’ve come to expect and make sure that you really want that for your child to hold on to—because he will. Whether in obedience or in rebellion, what he does will likely be a response to you. Sometimes, that will be what you least expect.

Are you struggling with sorting through your expectations and the legacy of expectations that was handed down to you. Shoot me an email if you’d like to set a time to talk about how I may be able to support you with this. Good luck!