Stop Punishing Yourself! (and Do This Instead) - Justin Lioi, LCSW - Brooklyn, NY

Stop Punishing Yourself! (and Do This Instead) 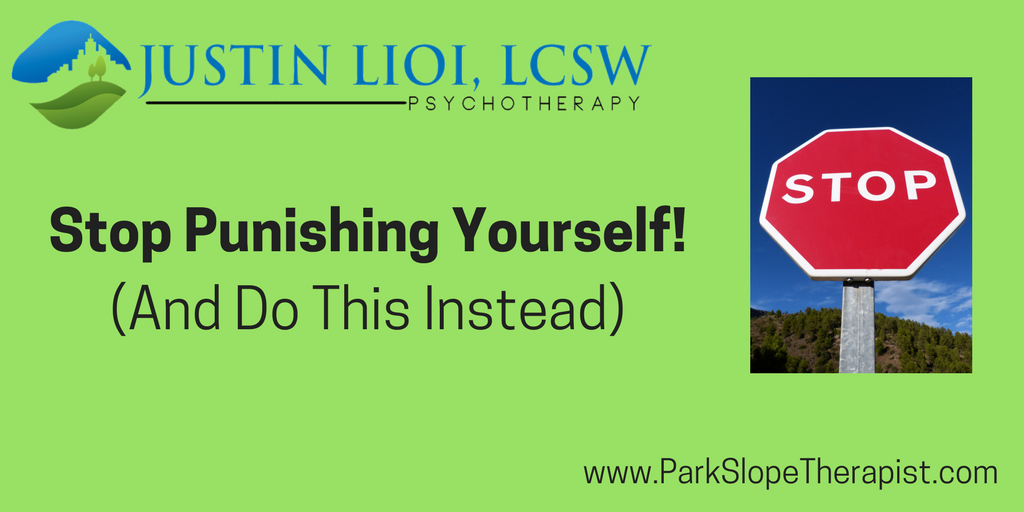 I grew up in a family where punishment was what happened when you did something wrong.
That probably doesn’t sound strange. It wasn’t cruel or unusual—and I’m certainly not talking about abuse.
What’ I’m highlighting is that from an early age I was instilled with the idea of: “Screw up, and you face the consequences.”
…you still needed to take your punishment.
As a therapist, especially a therapist for men and fathers, I’m not arguing against helping people understand that for everything they do there’s a consequence. There’s a reaction to each action, a positive or a negative one. It’s part of learning to take responsibility.
What struck me as I became first a teacher and then a counselor was that there were other ways to learn a lesson. You didn’t always need to be punished.
I learned how the ‘wrongs’ others did didn’t always need to be pointed out. Yet telling myself to stop punishing just didn’t make sense.

In learning about what actually gets results I discovered that it wasn’t a requirement that every bad word, every disrespectful act, and every breaking of the rules be directly addressed.
It took a while for this to sink in, though. I was still stuck on, “If we don’t point out all the wrongs then how will the person know their behavior is unacceptable?”
“Easy,” said wiser people than I (kindly ignoring the arrogance in my question.) “It’s called the ‘strengths perspective.’” The crux of this is that you look at all the things that were done ‘right’ and you talk about those. You highlight, explore, and investigate those.
Two examples (Whenever I use examples they are always compilations of several clients; names are always changed as well):
• George, who had been seeing me for anger issues for about seven months, came to a session disappointed in himself because that week he had gotten really angry at a guy who made a pass at his girlfriend. So angry that he ‘saw red’ and started to leave his apartment to confront the other guy with the intention of putting him in the hospital. Through his girlfriend begging him to stop, my client was able to stay home—and later talk about it in therapy. He was still angry, though, that his trigger could still get so hot so fast. Still, we were able to discuss how a year ago nothing his girlfriend said would have gotten him to stay home. Something had changed and it might not have been noticed otherwise.
• Simon was telling me how his fourteen-year-old son walked out of the kitchen for five minutes while he was trying to talk to him about how he’s treating his sister. Simon was furious that his kid walked out. I was impressed that the kid came back.
George wanted to punish himself for still ‘losing it’ and Simon thought his son should be punished for disrespect.
Because I grew up with the idea that bad behavior means that you must be punished I was able to empathize with both these feelings.

What did these men want to accomplish in their work with me? Was it more important that the bad behavior be called out, or that there be a change in the behavior going forward?
Once we shifted the conversation to explore how Simon had gained enough respect with a teen who, after some initial cooling off, could hear from his father all the things he didn’t want to talk about, Simon was able to do some actual parenting. He learned that he could be effective as a father while allowing his son to have his own time-out.
Next time he could work this in:
George and I learned a lot by focusing on how he was able to stop himself. We then could create a better plan for future times. Which is what he really wanted anyway.
I see people constantly moving away from the progress that is made in order to focus on something more primal, and I think this has to do with pride and vulnerability.
Let’s take bullying for example. Many of the responses I hear about bullying are often from dads who love their child unconditionally, but feel, “It happened to me, why shouldn’t he have to go through it as well?”
Or how many times have I heard from a parent, “If I talked to my father they way he did…”
We carry so much anger and hurt from how we were treated that it seems outlandish that we would let a younger generation “get away” with something.
We disregard the research that tells us that physical discipline and emotional berating stays with us and leads to higher levels of depression and anxiety. We say, “Well, I turned out ok.”
But did we?
Why are we so sure that if we don’t call out every bad behavior it will lead to a child who’s spoiled and entitled?
Isn’t there something in between?

To Punish or To Teach?

Now I am just as annoyed as others by the kids who seem to ‘get away’ with everything. The ones who have parents that seem to allow flagrant disrespect towards them and other adults and peers. But constantly picking out what your child does that is ‘wrong’ will backfire. It’ll build up resentment, poor self-esteem and often leads to a sad, scared, or anxious adult.
How attuned are we to what our children can really hear when we’re disciplining?
They’re going to be different from their brother or sister who may need to hear things in a totally different way.
Because, at the end of the day, you probably want to teach, not simply punish. You want some behaviors to diminish (or totally disappear) and others to increase.
Let’s distinguish between some behaviors:
Running into traffic: Absolutely needs to stop right now. No good reason for doing that.
Talking back to an adult: Maybe take some time to explore. Is this a pattern? Is it only with Aunt Patty? Did something happen to them (say, being picked on at school today) that led to an unexpected behavior? What triggered this language? This may call for a consequence—or it may call for a better understanding of your child and the child’s better understanding of themselves.
I can already hear people jumping down my throat:
“Absolutely not! If she’s going to talk to her aunt like that, what is she going to say in school or to a stranger? What happens when she says it to the wrong person and she gets hurt? I’m not going to have a child talk like that to anyone—this needs to be nipped in the butt right now. I didn’t raise my child to be like that!”
I hear you. But it doesn’t actually have the effect that you want.
And what’s going to have your desired effect?
All parents need to make this decision for themselves—and it’s an ongoing decision. It’s a different one for each circumstance and for each child. One decision results in a lot of anger and one leads to a greater understanding. One is spurred on by anger and hurt and the other is spurred on by curiosity and compassion.
Both, though, come from love.

Often, there’s little question that the adults I work with love their children. Unfortunately, love as the motivation isn’t enough. You will greatly benefit from knowing yourself, knowing your motivations and knowing your intentions.
You may discover, both for yourself and for your children, that just looking at the behavior and saying, “This has to stop!” won’t be as beneficial as finding out what is motivating that behavior in the first place. And a punishment may not be as helpful as we were raised to think it would be.
This post was originally published on The Good Men Project
and is republished here with the permission of the author.
Contact Me Here
Follow me on Facebook!
Follow me on Twitter! @JLioiLCSW