Sick of Feeling Like a Failure? Here’s What to Do About It - Justin Lioi, LCSW - Brooklyn, NY

Sick of Feeling Like a Failure? Here’s What to Do About It 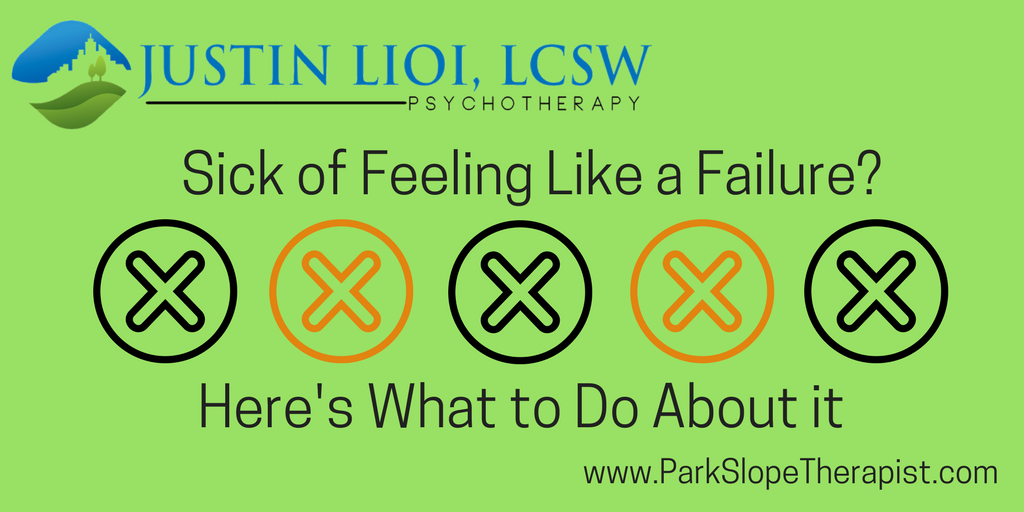 No matter how successful some men become they still often find themselves stuck feeling like a failure. It’s hard to wrap your head around if you haven’t been there. We’ve all heard the celebrity stories of low self-esteem and we have a hard time feeling sorry for that person. But it’s weird how easy it can be to look at ourselves and feel dissatisfied. Or worse.

How do you manage this if it’s a pattern of yours? Do you have a re-start up plan? Do you wait for it to pass while you indulge in addictive behaviors or just stay in bed?

In this post, we’re going to try to get underneath this feeling. Even though I know it’s a different story for everyone, we’ll explore some common threads and find new ways to approach whatever you’ve been doing that hasn’t been working.

An understandable impulse for yourself or someone else who is feeling like a failure is to counteract it with facts.

This is where people mix up gratitude lists with positive thinking.

What else is causing you to see beyond all the good in your life and focusing on this idea of yourself as a failure?

Getting stuck in the “Imposter Syndrome” could be one place. Many of us go through life with a cloud of anxiety just waiting for someone to pop up and say, “I knew it! You were faking the whole time!” We feel like at any moment we’ll be caught out. Maybe it’ll be tomorrow’s presentation. Perhaps it’s when the next client falls through.

This comes up in relationships as well. Men who just can’t believe that their partner is going to stay so they begin to screw things up. They find fault in the other person or start treating them in a way that causes the partner to argue a lot or even end the relationship. And then they get blamed for doing that while you remain the victim. Until it all starts up again, possibly with someone new.

When we don’t think we’re worthy of success we’ll do anything to not have it, even when it’s handed to us.

One thing that is a sure-fire way to keep you feeling like a failure is comparison.

I don’t want to get this too mixed up with competition, but there is some overlap. If you’re in a good place, competition can be great. It can even be a motivator factor for you. But if you’re already feeling down, it’s going to bring you down further. Seeing someone else’s success is going to make it difficult for you to dig down and do better—or even feel good and content about what you already have.

Because you want to get back into the place where you can enjoy what you have. The part of you that can see something someone else is doing and feel inspired by it.

I’m talking a matter of a mood shift. What’s getting in the way and how do you climb out of it?

Tips to Shift Your Mood & Stop Feeling Like a Failure

Feeling like a failure doesn’t do you any good. It zaps away the energy that it takes to motivate you to do better or to see the great stuff that’s already happened. If you’re struggling with this and can’t seem to escape the pattern please don’t hesitate to contact me and we’ll set up a free 15-minute phone consultation to see what you need to get out of that rut.