Getting in Touch with Feelings: Having an Emotion Before the Intellect Intervenes - Justin Lioi, LCSW - Brooklyn, NY

Getting in Touch with Feelings: Having an Emotion Before the Intellect Intervenes 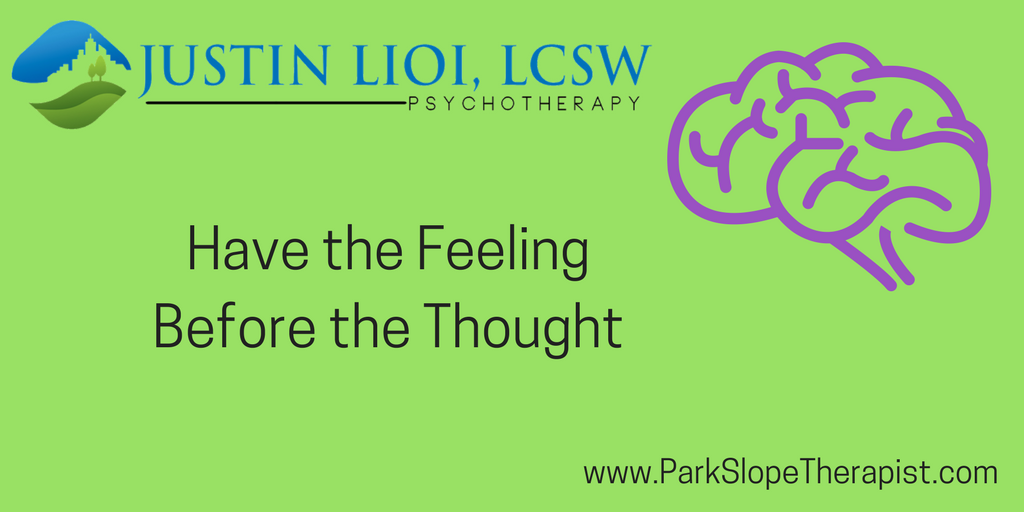 We’re a smart people. We are rational beings and when the worst is thrown at us our minds try to “figure it out” to “problem solve” and all that good stuff. Getting in touch with feelings seems to be in opposition to that. It easily spills into overthinking situations.

And men are, traditionally or stereotypically (take your pick), the ones who do this the most. Women are considered the emotional gender.

Well, if you’ve been reading my posts you’ll know how much I disagree with most extremes in thinking and this in particular.

But I do find that many of my clients struggle with the emotional, irrational space between an event happening and how they respond to the event. That’s the space I want to talk about today.

Learning from Tantrums: Kids Getting in Touch with Feelings

We can learn a lot from a child throwing a tantrum because that’s someone really getting in touch with their feelings. (Of course, it might be easier to learn if he or she is not your child.) The next chance you get, see if you can really empathize with that kid. Maybe they can’t play with a toy, or maybe there’s no discernible inciting action, but watch the full-throated expression of a raw feeling. This kid is just pissed, or sad, or scared, or whatever—they’re having a feeling and they are not ashamed to show it.

It’s something to see.

And to be a bit jealous of.

There’s no rationalizing for that child. There’s no, “Well, now, after my younger sister plays with the action figure then I’ll get a turn. Actually, if I let her play with it now, she’ll get to go to bed, then I get to stay up longer and have even more time with it…”

The kid is just angry because, like Veruca Salt, they want it NOW!

If all goes well, we can stop having tantrums once we learn some words.

One of the reason that tantrums happen is because a child is overwhelmed by a feeling—and they don’t know what to do with it.

One of the great things about language is that they can help us understand ourselves and understand internal processes that don’t make a lot of sense. If a child can say, “I’m angry!” or “I’m scared!” and that can be reflected by someone who loves them then they may not need that tantrum. They got their point across. They were heard.

Unfortunately, what often happens is that we begin to be shamed by our tantrum and that means we are shamed by our feelings, especially by our big feelings. (Side note: This isn’t just with the so called “negative” feelings. In just about every sit-com ever written someone expresses a lot of excitement about something and is met with a deadpan stare by someone else who tells them to “Get a life.” We all laugh, but we’re also shaming someone else’s joy.)

What we learn is that big expressions of emotion are not acceptable. At home, at school, wherever.

So we stop getting in touch with feelings and so much that often we don’t even know that we’re having a feeling. We just jump to the rational part of us that says we don’t really have the right to that feeling.

Getting to Know the Feeling

So what’s the alternative? We have to start by reacquainting yourself with the feeling. Getting a sense of what it’s like in your body to feel anger, or fear, sadness, or whatever.

While resorting to a tantrumming 3-year-old is not the answer, we can learn a lot by giving ourselves permission to feel that intensity. It’s not like it’s fully gone from us, just stuffed down the more our censors got involved in letting us know how we were supposed to feel. It’s important for us to seek out the healthy, trusting spaces where we can let it all out. Do you have anyone in your life who’s seen the full expression of you?

Have you allowed yourself to see you?

If you’re struggling with getting in touch and letting out those feelings please don’t hesitate to contact me for a free 15-minute consultation to see if counseling could work for you.