3 Reasons to Give Up the Illusion of Control - Justin Lioi, LCSW - Brooklyn, NY

3 Reasons to Give Up the Illusion of Control 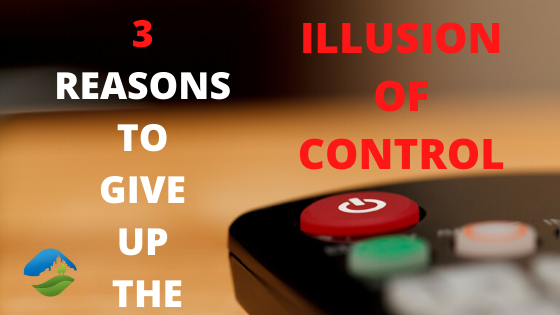 It’s an American idea: the open road, the prairie, the cabin in the woods, the deserted island.

There is an idea that we can and should exist where we are fully in control.

Unfortunately, as desirous as these ideas are, the more that they endow us with a sense that we should have full control is a destructive illusion.

When it comes right down to it there are so many things out of our control that feeling we are a success only when we’re able to obtain a particular outcome is quite simply a false reality and doesn’t leave room for multiple truths and multiple paths.

I recently read a line in the book IQ by Joe Ide. The scene setup is where one macho guy is being “played” by another less stereotypically masculine guy who is clearly physically weaker than he is. The first guy’s sense of control is so threatened that he says,

“You think you can walk away from me and take my manhood with you? I shoot myself ‘fore I let that happen.”

We often talk about our masculinity as something that needs to be so strong, but if it’s so easy for you to be taken advantage of or that someone can easily “take my manhood” then I think we need to realize how delicate it actually is. We need to reconsider what this illusion of control is actually doing to us.

That character (as well as most of us who identify as male) may learn a lot if we are able to let go of the idea that we are supposed to be totally self-sufficient and in control.

“Stop trying to be a damn island!”

Here are three things to gain from giving up the illusion of control.

There’s an enormous relief that we feel once we give up the idea that we are “supposed” to know all the answers. People sometimes ask me what men have to gain from feminism and if it is just about giving up privileges we never asked for.
Well, we gain the loss of the burden that we should know what to do all the time, that we should know how to fix everything, or that we are alone in keeping our families safe. Once we can move through the shame of not having it all together all the time, not being in control all the time, not having to manage all the heavy lifting all the damn time we realize how much lighter we feel.
It’s not necessarily easy, but the pressure being lifted gives us so much more space to find creative answers to problems and to let our partner, our friends, or another trusted individual share the work. (Remember sharing? We got taught it in Pre-K and we hated it then too…)
I had a good example of this recently with a workshop I was leading. I was placing such a high level of pressure on myself for keeping the group together, protecting the group from folding, keeping people interested, engaged, and feeling cared for that I neglected to realize how selfish that was. Selfish because I wasn’t leading the group: I was co-leading it. But I wasn’t sharing with my co-leader all the anxiety I was feeling to make sure the group succeeded. Once I was able to do that I got to also hear the pressure she was putting herself under as well. What a relief that we could talk about it, and that we could share this burden, and that we could put our heads together in order to let go a bit.

2. A Chance to Differently Succeed

I once heard a saying that went something like this:
“If you don’t know where you’re going, you’ll never get there.”
I’ve grown to hate that saying and the self-righteous smarminess embedded in it.
Oh, it’s fine to have goals, to desire certain outcomes, to even have concrete ideas that you must meet. The problem comes when we apply this idea to everything, particularly relationships, but for many projects too. Once we have in our head what success looks like, we tend to block out all the other unknown possibilities that could make us even more happy. Our need to control for the outcome can get in our way of seeing what we’ve already accomplished and what we actually could accomplish that might be even more exciting.
I recently met someone after not seeing them for about ten years and I was really impressed. The thing they told me they were going to do with their life when they set out for grad school ten years ago, they accomplished. I was impressed, but I also knew that I was glad I didn’t follow that same trajectory. I started my first career in a very different direction from what I’m doing now–and I don’t regret that at all. I was able to listen to myself when I felt some other pulls and was able to be flexible in how I defined my own success. Others around me were less impressed–I was told by some people that I quit and should have stayed the course. Maybe. But I was able to adapt and shift my idea of what success would look like, while being open for what opportunities came up. I’m in a very different place than I would have imagined when I was 22 and a college graduate with a Music Degree and a dream of winning Oscars. And I don’t regret getting that degree or following a new path.

3. A New Form of Power Through Trusting

If you have lived your life constantly being the leader then you are not aware of the power that comes from trusting someone else to be in charge. I remember in my pre-teen Boy Scout days that the Scoutmaster started a group by saying,
“There are two kinds of men you could become: you can be a Leader or a Follower.”
It was clear from how he spoke that being a Leader was the only positive way to be. That’s what a Real Man was.
And being a leader is great.
It feels good to support others, guide the direction of projects, or assist someone who’s struggling. It’s great for the ego (in a good way!), it’s great for others, it’s a powerful feeling. But like so many other things in a world that prefers everything to be an either or an or, being a leader all of the time robs us of how good it can feel to not be in charge once in a while. Following takes a certain skill set as well because we need to give up the sense that we have to have the answers all the time or we’re not Men. It’s a wonderful gift to a partner or friend to trust in following their lead. Many of us have been hurt through this, maybe even gotten lost, or led astray–it’s true. Maybe allowing others to make mistakes will give us permission to make mistakes as well. Maybe being a follower every once in a while will allow us to take ourselves off the hook when we don’t know the answer.

Feel free to go on trying to control everything–yourself, your partner and your kids’ happiness, your job–if that’s what you want. But ultimately you’ll be living your life only feeling happy if things go they way you planned and other people don’t have their own ideas of how their lives should be.

It’s a sure recipe for disappointment.

If you need some further support in learning to let go of this, feel free to get in touch and we’ll have a free phone consultation to talk about next steps.