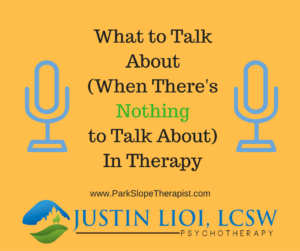 Often when people enter therapy they are under a lot of pressure. Surprisingly, sometimes that pressure is “How do I do therapy?” and “How do I do it right?” and even “What if I have nothing to talk about?”

Many people haven’t been in treatment before when they get to my office–and many of the guys I see are still questioning whether they should be in counseling– and they aren’t sure what’s expected of them. They don’t know if I start, if they do, will there be questions, will there be homework? They may even pause mid-sentence to check in about whether they are talking about the “right” things or sit silently as if they have nothing to talk about.

The answer, like in so many improv classes, is “Yes, and…”

Beware of Judging Your Therapy Topics

There aren’t many wrong ways for the client to do therapy. But one thing people seem to be fairly certain about is that in “talk therapy” they should be “talking” and they’re doing it wrong or treatment is over if they have nothing to talk about or if there is some silence. And I am all for talking. I like to talk and I like it when my clients talk, (silence can be helpful for the client as well, and it’s still important to move to talking because of how often we read into things–and get them wrong!) but often clients are judging what they are talking about. People almost start censoring themselves and say that something isn’t worth talking about, or it’s too minuscule, or not deep enough.

Feeling like you’re ready to jump in and learn more about your current issue? Contact me here.

There are times when it becomes clear that a client is talking “around” an issue, possibly avoiding some feelings that are more central to what’s going on. That’s my job to zone in and slow the conversation down. Check in and see if that’s the case.

Take the pressure off yourself–you’re doing enough work in therapy to spend too much time wondering if it’s the “right” work. Hopefully, you’ve established enough trust with your therapist to allow them to do their job. This is especially important for people who are inclined to worry that other people are often taking advantage of them.

The Freedom of Having Nothing to Talk About

One particular place this comes up (and I expand on it in my monthly Topic Expert column at Good Therapy) is when a client says they have nothing to talk about. Sometimes they’re surprised, other times they’re worried.

I think it can be a helpful point in the work. It allows you and I to look at some of the stuff that the crises haven’t given us time for yet. Most people want to not just endure the difficult times, but to learn about what led to them, or at least to mitigate their response to those times if issues are out of the client’s control

(Sadly, therapy is not going to stop your mother from asking when the grandkids are coming or suddenly make your boss a lot more amenable to your request that he stop yelling at you in front of everyone. But this might be a time to explore

So to tie it back to “talking,” give yourself permission to bypass your personal censor telling you what is appropriate therapy material and just…talk.

Trust that your therapist can sort out with you the importance in what you might judge as mundane. It might link back to a so-far unseen pattern. It might shed some light on where your anxiety or depression get triggered. It might be a clue to what’s underneath the anger that you’ve been told is your “problem.”

When All Else Fails, Go With the Gut (Feeling, that is…)

The “gold” in your treatment is when you are able to talk about how you are feeling, right now. If a client is having difficulty getting started in therapy, I’ll often ask, “How are you feeling about being here today?” That usually gets the ball rolling.

All off these give us a jumping off point by helping you zone in on how you’re feeling right now. We’re not manufacturing something that’s not there. It’s not how you should be feeling—it’s an invitation to put aside the armor that you wear to get through your commute or your work day and check in with what’s really going on. Suddenly it’s not that there’s nothing to talk about. There’s a whole lot of somethings.

And it is an invitation that you can say “No” to. You can find the “thing to talk about” if you like. Find something “important” and therapeutically sound. We’ll go with it. Just bear in mind that you’re allowed to be fully you, authentically you. No matter what issue you sought out counseling for. And sometimes that is found when the planned words fall away.

If you feel that there’s nothing to talk about, but still aren’t happy with how your life is going, please give me call or shoot me an email.