On the All-Importance of Trust in Relationships: The Hateful Eight - Justin Lioi, LCSW - Brooklyn, NY

On the All-Importance of Trust in Relationships: The Hateful Eight

The Hateful Eight is the kind of movie that reminds me why some people are so tired all the time. It’s a movie about a bunch of people who have little, if any, trust in relationships. And that is an exhausting way to live.

Imagine if every time you entered a room you had to metaphorically disarm everyone. You needed to look them over, get a sense of everyone’s motives. On TV this is often how PTSD or post traumatic stress disorder is portrayed: everyone around me is a possible enemy. Trust no one.

This isn’t simply about power. Or being liked.

In order to exist in this world trust in relationships is incredibly important. For survival, yes, but to really live, trust is imperative.

Trust occurs the minute we enter this world. Babies need to rely on someone to give them food and to hold them. Trust is something that we need to learn–it’s basic. It’s the thing that keeps us going and is the beginning for any kind of happiness and, paradoxically, it’s the first step in becoming independent.

When a baby is able to handle their caregiver leaving them because they believe that caregiver will return then that is the real beginning of them being able to have a relationship. It’s what Erik Erikson calls an “infant’s first social achievement” in his Eight Ages of Man from Childhood and Society.

Erickson talks about eight psycho-social stages of development and each one focuses on accomplishing a task. And he phrased them all like they were boxing matches. The first stage is called “Basic Trust v. Basic Mistrust” (Who will win!?)

If we can’t learn to trust someone as a kid (our mom, dad, caregiver) and believe that our needs won’t be met we can’t really develop beyond this stage. Do you know any kids who are eight or nine and still have trouble separating from their parents? Maybe you know some adults who can’t be separated from their significant other. This is an indication that when it comes to Basic Trust v. Basic Mistrust–the mistrust won.

Now the progression of a relationship should include a stage of “learning-to-trust.” When you are newly dating someone maybe you’re holding their hand all the time. You go to a party and neither one of you leaves the other’s side, you’re texting each other all the time–this makes sense. You are learning to trust them, but you’re not there yet. That trust in relationships hasn’t been earned for this particular relationship.

But if after several months your partner can’t spend a night with friends without you needing a constant check-in or if you can’t go away for the weekend without them–you might want to take a hard look at what’s going on.

Maybe they’ve given you good reason not to trust them. If they’ve lied or cheated, it makes sense that you’re uncomfortable with them out of your sight.

But if it’s unacceptable that you’re away from each other or you’re uncomfortable or jealous when you don’t know where they are for a little while, you may need to look at yourself and your ability to trust. To trust at all.

So, before you ask, yes, the stuff that happened when you were a kid matters. I know you’ve put it behind you. You don’t want to dwell on the past. You’re bigger than that.

The thing is, you may be reading this because, well, it’s kind of still a thing.

And that is the state I felt I was in throughout The Hateful Eight. Here are a bunch of people, mostly men, who are so incredibly distrustful of each other that they are unable to let their guard down for a second. If they do start to have some trust in relationships they could be shot, poisoned, or who knows what.

Going through life feeling that you can’t trust anyone is unfulfilling, lonely, and incredibly exhausting. If this sounds familiar, have you ever thought about the amount of time you spend thinking about every aspect of every situation? Do you immediately imagine what are the worst possibilities and how to prevent those from happening? That’s a lot of work.

Parents often do this by default. Their adult child tells them about some exciting adventure, maybe one that has some risk, and there comes mom, finding all the ways it could possibly go wrong.

But you can choose not to exist in that way. Maybe that seems like such an impossibility if you’ve lived your life by the theory that you will never have trust in relationships. I’ve met lots of men who made a decision early in life that they would not fully rely on anyone else. Often they can tell you the moment they made this decision. A point when a parent truly let them down or another person didn’t show up for something important. A time that they felt mocked, or vulnerable and they vowed that it would be the last time. No one would see them vulnerable again.

Their worst fears now are being “needy” or seeming “dependent” on a partner, a friend, anyone. These guys are very reluctantly in therapy.

If this is you, what happened is that you probably developed a strong layer of protection. You only rely on yourself. And if you did trust someone, even a little bit, who disappointed you, you would get down on yourself once again and say, “I should have known.”

A guy who got stuck in the trust v. mistrust phase probably was the same guy who coined the phrase, “Fool me once, shame on you. Fool me twice, shame on me.”

So much shame, but that comes later (it’s actually part of the second stage by Erickson. Another movie, perhaps…) So before shame gets tackled, how do you learn to trust again? 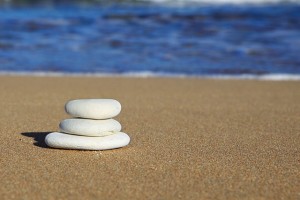 Re-Learning to Trust in Relationships

Well, first you’ve got to want to. You have to make a conscious decision that you are going to do this. That you’re going to take a leap. Not a big leap. Not a trust fall. But you’ll need to decide that you want to push at the boundaries of your non-trustingness. You’re going to decide to explore, to get fooled, to stick your toe in the ocean.

I like that metaphor because the ocean is vast and just the hugeness of it can overwhelm you and convince yourself that it’s just not worth it. It’ll never be worth it. But when you’re on the edge of the beach you can afford to put your toe in knowing you’re close enough to the shore. You don’t like it, you can jump back. But you are looking at all those people on the cool boat far out there and what an awesome time they seem to be having.

Ok, step away from the metaphor. What would the toe in the water look like in real life?

These are just a few common things to try. Do you know what would make the most sense for you? What would be pushing at your boundaries–but not too much? Let me know in the comments below what you’re willing to do. And if you’d like to explore this more one-on-one, shoot me an email or call and we can work on this together.