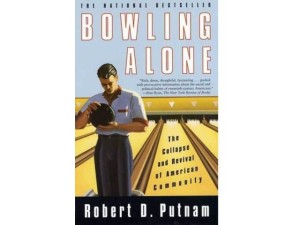 I know more and more people who are experiencing something frightening in their lives and it’s something they thought they’d conquered a long time ago: making friends. This isn’t something entirely new. Years ago Robert D. Putnam wrote about adult friendships and disconnection in his book Bowling Alone.

Think back to your first day of school. “Will anybody like me?” Kids still wonder whether they’ll be sitting alone at lunchtime and picked last in gym class. Teenagers agonize all summer about whether they’ll get along with their college roommate.

Yet now when it comes to big events like your career, even when you get a new job, there’s so much else to be concerned about that whether your office mates are going to make time for you is not your highest priority.

Many of the transitions that mark childhood and young adulthood are filled with anxiety about who is going to like you—and it’s not just the very shy people who felt this way. Still, as you settled into your career and found a part of town that felt like home you started to think at least THAT anxiety had been dealt with.

But then your college buddy, who moved to the city with you, is heading back to Indiana. The fun neighbors who have your spare key are moving to another part of town. Your best friend decides that having a child is more important than a night of playing Settlers of Catan. How dare they!

And suddenly as the week goes on that pit in your stomach that used to arrive early September in the 1980s and 90s is back.

Well, the exciting part is—congrats! You’ve been here before! Even if you don’t think you did it so successfully, you got through it and lived the John Ciardi quote* that pops up on every English major’s dry erase board.

And you know so much more now! There’s hope!

Lots of people are in your position and, hey, we live in NYC—the loneliest friendliest place in the world. Check out some of these links if you haven’t already:

*”You don’t have to suffer to be a poet; adolescence is enough suffering for anyone.”