The Scariness of Being More Assertive 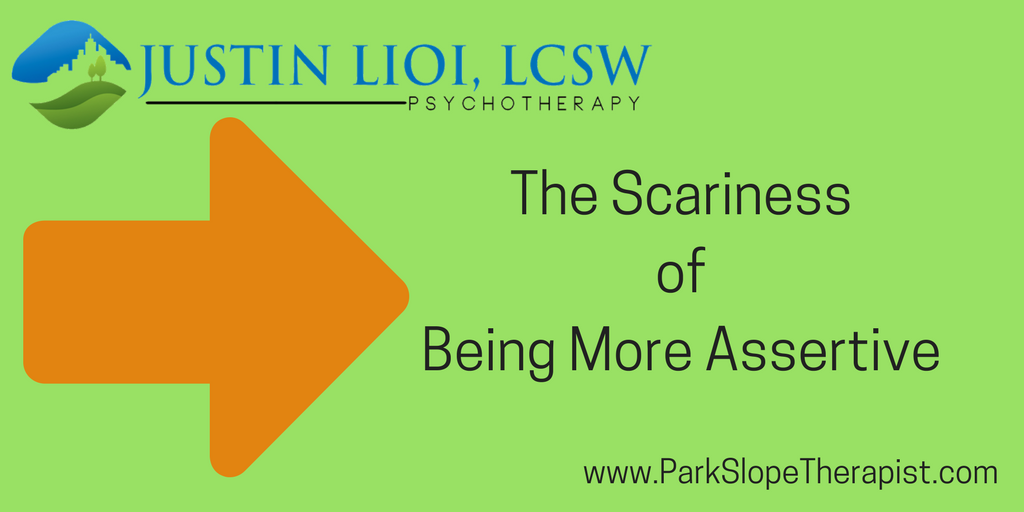 Aggressive men often mistakenly think they are being assertive. Men who are not assertive nor aggressive usually say they want to be more assertive. The fear, though, is that that deep down they’re anxious that their hidden aggression will come out. Being more assertive is difficult. And it does come with some risks.

Your non-assertive, laid back guy who never seems to make decisions is very possibly seething with resentment. They are (often) concerned that if they let that out, if they asserted themselves, it would be bad. It could even be violent.

But really since they’ve rarely, if ever, allowed this part of them to come out, to expose their rage, they have no clue what it will be like.

If you’re the easygoing guy who holds it all in and always says, “Wherever you want to eat is fine with me,” then you may or may not be aware of the resentment and anger that may also be roiling inside you.

It’s what comes of never getting what you want. And not only that, but also feeling that you rarely get a sense that what you want is important to anyone else. Usually, people who hold this all in end up surrounded by people who like to make the plans, decide what to do. This can seem to be a perfect fit.

But then you’re in a spot when you are ready to start being more assertive and say, “I’d rather do X” or “Let’s go to Y movie instead of the Z movie you want to see.” When you do that you’re upsetting the order, the system is out of whack. If you get challenged you probably find it easier to back down than assert yourself further.

You may eventually give in, restoring order, ending conflict.

But you’re left with feeling that you have no control.

I use the word “could” a lot there, because that scenario is often the scary one that keeps you going to see movies you don’t want to see and eating in restaurants you don’t really like.

This comes from seeing conflict as a zero-sum game. Either I give in or it’s a battle with heated confrontation and anger. This keeps a lot of us from putting our needs out there.  Our anxiety about the possible conflict leads us to attempt to control it. Sure, there’s the chance we’ll be stepped on, but there’s also a chance that we’ll “lose it.”

And that’s too scary.

Another reason some guys aren’t as assertive as they’d like to be is because letting people know what you want and how much you want it feels vulnerable. When you express a strong feeling, it gives people a chance to see your passion. To see what you want: and to make sure you don’t get it.

I know several men who can point to different parts of their lives, usually in childhood, where they were so embarrassed by a strong feeling or so let down by someone who was supposed to be there for them, that they literally made the decision that they would not expose themselves in that manner again.

No one will see them that angry, that sad, that afraid. No one will have a chance to take away what they want and know how much they hurt them.

Here’s an example from my own life:

I remember tearing up in front of my 7th grade teacher, and denying I was crying, while she kept calling attention to it (note to teachers and parents: don’t shame kids, especially 7th graders). For some reason, I couple that moment with watching Law & Order and being so impressed with the character of Jack McCoy. Here’s a guy who’s not a cop, he’s not the most masculine, Rambo guy on the planet, but refuses to show criminals, judges, anyone that he could feel vulnerable—that they could have an effect on him. Granted, I was unaware of the damage of him being an alcoholic and generally not noting how that was also slowly eating away at him, but it seemed something to look up to at the time.

Since then I’ve met many men who have had a similar Aha! moment that helped them survive for a time, but got in the way of deeper connections with others.

Showing what you want, exposing your feelings does leave you vulnerable, but you don’t need to do this with everyone. You do need to learn to do it with people who have earned your trust. With people you want to be closer to.

The Cost Benefit Analysis of Being More Assertive

There’s a cost benefit analysis to be done about whether you’re really interested in being more assertive.

Remember from above that any change you make is going to disturb the homeostasis. People may not like the new assertive you. They may want the guy who’ll do anything they decide you’re going to do. Important people, the people you want to keep and that want you to be in their lives, are going to adjust. It’ll be a learning process and it’ll be a challenge.

You need to decide if being more assertive is worth it to you because it’ll probably take some work. The benefit? You put your needs out there and you’re not squelching your feelings. There’s less resentment. There’s still going to be disappointment. You won’t have your needs met all the time. People will know when you’re let down and when you’re angry and when you’re really, really excited about something even when it doesn’t come to fruition.

I’m of the opinion that it’s time to learn how to express yourself in a manner that is healthy and that gets your point across. This will make your relationships deeper and give you more fulfillment in your work.

It’s also a risk. Only you can know whether it’s a risk worth taking.

Thankfully, that risk doesn’t have to be all or nothing and many guys I’ve worked with find the counseling room a good place to practice being more assertive. If you’d like to know more about how counseling could benefit you, please get in contact with me so we can set up a 15-minute FREE phone consultation.