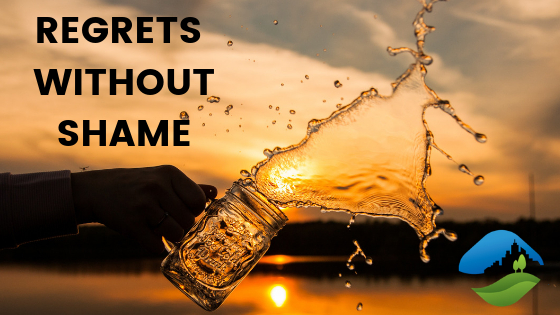 I recently spoke with someone who told me that she and a friend had made a promise when they were younger. They vowed to live life with “no regrets.” We spoke more about what that meant. It was something different to them as teenagers than it is now, but the life philosophy of not being overly burdened by mistakes was still intact.

The adolescent sense of I-can-do-anything and throw-caution-to-the-wind was not the main takeaway. We need to stop getting caught up in the shame spiral when we don’t act as we wish we had.

A mature, adult response is to hold yourself accountable for not-great behavior. You can then use that knowledge to propel you toward different future choices.

Easy to do, not so much.

Guilt is Not Shame

The difference between guilt and shame is a sticking point for a lot of people. They often string them together. While there’s definitely some similarity, they’re not the same. Plus they do very different things to our sense of self. While the instinct may be to avoid either feeling, the energy to do that may be better spent feeling the feeling.

Guilt has been in the cultural vernacular for a long time. It’s only recently that ‘shame’ is getting called out for the truly damaging stuff it does. We have Brené Brown to look to for that. While she writes mostly for women, there’s a lot men can learn from how shame is running, and often ruining, their lives.

Lots of people come to therapy with shame. Some have it front and center and express a true self-hatred or just a worried question of “Am I crazy?” Therapy is just a last step before they throw in the towel. Most others come to therapy for some other behavior. Often we find that the behavior is an attempt to avoid feeling the shame. (And, again, here are my thoughts on avoiding feelings.)

Some of what we do in therapy is transforming the paralysis of shame into actionable guilt. That can lead to new, healthy choices, fulfilling relationships–and a more positive sense of self. It’s a productive way to move through emotions.

How Shame Lies to Us

Shame grinds you down and can leave you in a depressive, irritable, aggressive state. Often we don’t know that the core of our social anxiety, our anger, our poor parenting decisions are attempts (sometimes successful, sometimes not) to avoid feeling shame as well as to avoid feeling anxiety.

You see, shame tells us that we are irredeemable. There’s no hope for us, we’re just bad. James Gilligan writes about shame at length in his study on men and violent behavior in his book Violence: Reflections on a National Epidemic. Gilligan explores how shame, and the attempts to avoid shame, are connected to the preponderance of violence, particularly by men, in society.

Shame kills. Guilt doesn’t have to.

‘No Regrets’ Doesn’t Mean ‘No Guilt’

What I also loved about the “No Regrets” idea is that it wasn’t a prescription to do whatever the hell we want. It’s an intention to not get stuck in the depressive loop of living in the shadow of our actions. (Feeling stuck in that right now? Take 5 minutes to connect to serenity.)

This is more of a life philosophy. It’s a willingness to fail and to make mistakes. To view mistakes as opportunities to learn more about yourself, how you were socialized to feel a certain way, and what to do differently next time.

I think most of us can point to decisions and actions from our past that we replay.

A Formula to Break Through Shameful Regret

There are things that we’ve done that we wish could have gone differently. It’s not necessarily a bad thing to be reflective in this way. It’s fairly healthy to have touch-points (good ones and not so great ones) that we can learn from. Hopefully, we can hold onto them for when a similar circumstance arises.

We can ask ourselves:

This formula can be really useful.

Because guilt feels pretty bad. But it’s the kind of “feeling bad” that forms a healthy conscience. It can change future decisions. Take how we talk about discipline for children now: There’s much more of a focus now in disciplining kids to make sure that we as parents and teachers are pointing out the negative behavior as opposed to the bad “nature” of the child. We can take a lesson from that for ourselves by adding some self-compassion to the mix (again, this doesn’t mean we let ourselves off the hook!)

It’s not that you’re a bad boy for pushing Aaron. It’s that it’s not okay to push Aaron because he could get hurt. Yes, there may be some consequence so the child can further learn about the behavior, but it’s the behavior that’s bad, not the child. Let your shame morph into guilt and transform that into a type of “good anxiety.”

Holding Ourselves Accountable Without Shame

Right here is where people get a little nervous because we haven’t talked yet about taking responsibility for our “bad” behavior. It’s not just about, “I’m going to do differently next time.” It’s also about holding yourself accountable for what you did.

That’s a dangerous cycle if we are just forgiving ourselves without the accountability piece. I’ve heard many an abusive partner say in a rationalizing way: I feel bad, I’m sorry, I won’t do it again.

There may be more to do. There could be amends to make. Apologies and real consequences for our behavior. Maybe some deep reflection on why we continue to act in a certain way and why we seem stuck in a dynamic that leads to us doing something hurtful or unhealthy.

The thing is, shame is not going to help you move toward better relationships, with other people or with yourself. Shame stays too focused on You and doesn’t help us move toward what you want to do differently or the people who’ve been hurt.

but we’ll also be moving towards self-compassion and marrying that to accountability.

You can do this and it’s so much healthier than the punitive sense of shame.

Guilt and shame are not the same thing.

One keeps you stuck and filled with self-loathing and paralysis, the other can help you move forward in a loving and accountable way.

Which do you feel will make you the person you want to be? How can you live your life with ‘no regrets’ and still learn from your mistakes?

If you’d like to talk more about this, or want to see if it would be helpful for us to work together, please contact me for a free phone consultation.