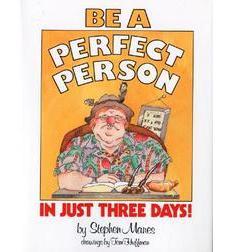 I referenced this book, Be a Perfect Person in Just Three Days by Stephen Manes, a few days ago and it gave me the opportunity to reread it. I actually found out about the book first through the PBS series Wonderworks when I was a kid. I read the book soon after, but I’d recommend both. If you have a child who’s fairly anxious or a bit of an over-achiever (or both!) it could be a welcome antidote.

Without spoiling too much you can imagine that Milo, the hoping-to-be-perfect hero, does not become perfect and he learns that becoming perfect, aside from it probably being unattainable, is actually not that desirable once you get right down to it.

As Dr. K. Pinkerton Silverfish says, “Perfect people…sit around and sip weak tea and think about how perfect they are.”

Anyway there are three steps for Milo to follow over the three days and these include developing will power, becoming fearless, and learning to do nothing. All worthy goals in themselves, but all at the same time and all at once can get pretty hairy. It’ll probably take you about 15 minutes, so give the book a shot.

Sometimes the best part of rereading books from when you were a kid is seeing the stuff you missed. Not just the stuff that you “get” now as an adult, but there are whole swaths of things you edited out. Maybe they didn’t seem important to the story at the time.

This happens even with movies. I’d recommend watching a movie you haven’t seen in a while, but one that you consider up there with movies that were important to you at some point in your life. Re-watch and there’ll be a scene, a line, a something that strikes you and you’ll wonder how you missed it the first time around.

In this book, that something was Milo’s dad, Mr. Crinkley.

I forgot that Milo’s dad figures out what he was doing halfway through. Many parents, seeing their son on a weird kick that was not going to have the desired outcome, would try to deter him, maybe gently, maybe not.

But Mr. Crinkley doesn’t try to save Milo and doesn’t make fun of him.

He keeps a watchful eye on his son while Milo strives for the impossible.

Parenting From a Step Behind

It’s a wonderful way to parent. Allow your child to attempt the impossible and be there when he’s about to blame himself for trying. How many of us would have liked a mom or dad who did that? Maybe some of you did.

We can’t protect our 6-year-olds from being hurt by a friend.

We can’t stop our middle schoolers and teenagers from having their hearts broken.

We can’t be there to make sure they make the best decisions all the time. And sometimes, especially as they get older, we just can’t bail them out anymore or we become an enabler.

But we can let them know that we haven’t given up on them. That we’ll listen and that we’ll be there. And hopefully, at the point when you can’t be physically there, they’ll have absorbed enough of you so that if you’re not there, you’re inside their heads and their hearts, and their consciences. Holding them when they are worried they can’t hold themselves. That’s what modeling is all about.

Most of my readers have young kids–most aren’t sending them out into the working world just yet. But now is the time (and now might be with your infant or with your 4-year or 12-year-old) now is the time to lay the groundwork so that your child knows that at the end of any given day you’ve got their back.

If you’re a dad struggling with the anxiety that you will not be the perfect father, that you won’t right all the wrongs of how you were parented–or won’t live up to the gold standard of your mother or father–get in contact with me and let’s talk about how to help you be as imperfectly successful as you’d like to be.