At Last, the Secret to Fatherhood is Revealed! - Justin Lioi, LCSW - Brooklyn, NY

At Last, the Secret to Fatherhood is Revealed! 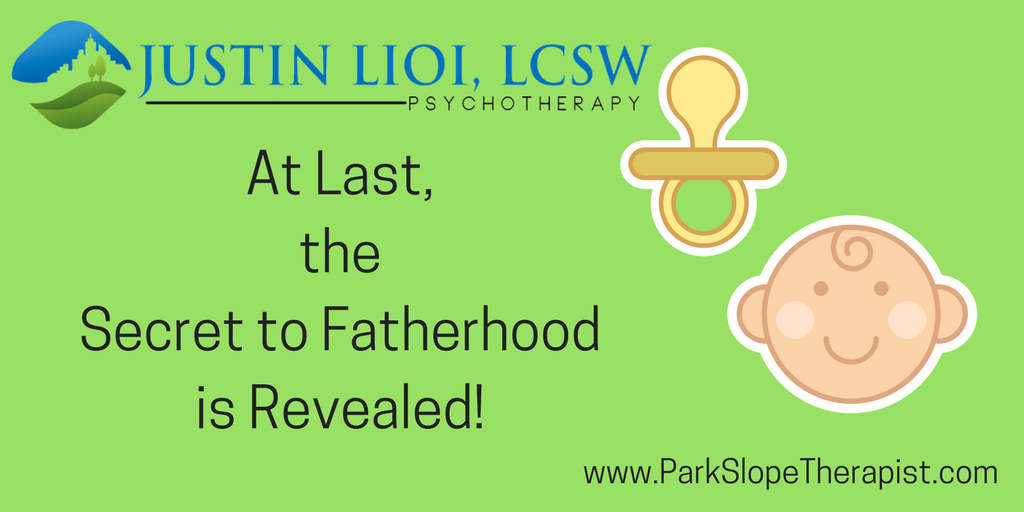 Maybe you’re the guy who reads all the parenting books. What to Expect, etc. How to be a dad. How to not be a helicopter parent. How to be a Tiger/Elephant parent. There’s a long list. I’m not sure if I feel proud that there’s actually a “Fathers” section in the bookstores now (even though it’s still so much smaller than the “Mothers”) or upset that more books just mean more to stress out about? (Nah, I’m glad. Some real personal stories there if you have time to read them. Or write one yourself!) But do any of them tell you the secret to fatherhood?

Preparation is great. There are developmental stages to learn about and there are some not-so-intuitive things that happen with babies. Getting a bit of a primer can ease some of those early anxieties. If you’d like me to take you through a few week of getting ready with a short email and ‘action’, sign up for my Bumpy Road to Becoming a Dad email course.

So what do you do when stuff still comes up to stump you? Because it will. This is where the secret comes in.

The Readiness is All (or is it?)

Ha—I’m quoting Hamlet because it’s all about too much preparation. I’m also reminded of Jane Addams writing about ‘the Snare of Preparation’ in that it’s easy for some of us to get so involved in the “getting ready” that we continue to feel less and less ready.

And that baby is not going to follow your timeline.

So, how have you been going about prepping? Are you a book or blog reader? Podcast listener? Sitting at the feet of your parents and others who’ve raised kids before you? Or are you just closing your eyes and jumping?

There’s no one way to get ready for having a child, but gathering some knowledge is important. You don’t need to be an expert on child development, but it may relieve some anxiety if you know some basics like how to change a baby–or just how to hold one.

It also can’t hurt to have some idea of when to expect certain milestones like walking and talking. There are windows for each of these so it’s not to say that on Day XYZ child #2852 must take her first step… or else…

But it’s good to know the window.

Shifts in behavior can be less surprising if you know that they’re coming. Your infant can be held by several people for the first few months without them getting upset, but somewhere around 6-9 months they may just want mom or dad and no one else will do (possibly just mom, it’s not personal, they were inside Mom for a while). Knowing that this is coming could spare you some hurt feelings.

And don’t be surprised—your child seeming to want someone else might bring up some jealousy. Be prepared for that too.

And that’s a nice segue into this section. Getting emotionally prepared. This, unfortunately, only goes so far. Books and therapists, in-laws and pediatricians can tell you about the sleeplessness, but until it’s the fourth night in a row of crying and feeding, difficulty soothing, knowing that you have to be at work to give a presentation at 8…that physical toll is not something you can prepare for other than to know that it’s coming.

The same thing with:

And managing that…here comes the secret.

The Secret to Fatherhood: Becoming Comfortable with Uncertainty

I wish I had something more concrete to say. This is going to sound like a cop out, but in my defense, it’s the truth.

But those of us who are able to manage ‘not knowing’ and not lose ourselves in the process seem to be the ones that thrive.

It’s not the ‘positive thinkers’ or the ‘expect the worst, hope for the besters’. I’m talking about learning to move through fatherhood getting pissed that she won’t go to sleep, being shocked when he says that curse word you thought you never said in front of him, laughing hard when she does something awesome, and crying when he does something that frightens you.

The Road Map is Knowing Yourself

There is no road map. There is no manual. There are some developmentally expected milestones to look for and talk to someone about if they’re not occurring. There are feelings of anger and dislike for your child that you’re not going to want to admit you have.

The second part of that secret: Much of this comes down to how comfortable you are pre-baby with being you. And how willing you are now to explore that.

Many men get this—I have a lot of clients who start coming to counseling because they want to shift how they were raised. They want to not pass along an unemotional father, a “vampire” of emotions mother.  They want to not have to get angry in the way that was modeled for them.

That’s not a matter of following steps 1-2-3 in a parenting book.

Because you will be modeling for your child, from day one, how to deal with the unexpected. How to deal with disappointment. With success. With failure. And lots in between. Ready?

It’s supposed to be unexpected. Your kid is (or is going to be if you’re still waiting for them to arrive) totally new and doesn’t completely fit into any book on parenting.

You are totally new as well and you don’t fit easily into any book on fatherhood.

One of the most significant things you’re going to pass on to your child is how you adapt. That’s the third part of the secret to fatherhood. How you respond to the unexpected. You don’t have to become the easiest going guy on the planet, you don’t have to not let anything bother you, but you’ll relax a little bit when you remember that “[insert higher power here] laughs when you make plans.”

Your child is going to face a world of change. They’re going to have to learn to deal with transitions. Survival of the fittest isn’t about being the strongest, it’s about you being the one who can adapt without losing yourself.

If you’d like to start to understand yourself better in order to be fully and completely (well, as much as is possible) there for your child, please don’t hesitate to get in touch with me for a free 15 minute phone consultation.