How to Deal with Pet Peeves

What are your pet peeves? 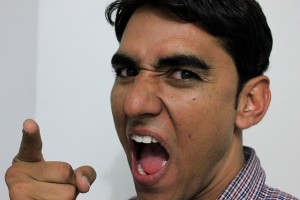 I always thought a great coffee table book would be an illustrated list of people’s pet peeves. I’ve been asking around lately to get a sense from others about what upsets them. I’ve heard several:

This list could go on…and on. So why are these the things that cut so deeply?

Pet Peeves are Not Life Threatening, so Why Am I So Pissed Off?

None of these pet peeves are earth shattering. Murder doesn’t fall in this category, or rape, or really anything that we would make a law against (I could be wrong, no one’s fact checking this blog, so let me know) and being made to listen to that static-y, muffled music is not leaving anyone maimed or hurt in any major way.

Pet peeves are really just stuff that gets people’s goat and if unheeded can lead to anger management classes.

Many pet peeves deal with other people’s perceived inconsiderate-ness. It presupposes that this person knows how annoyed I am if they keep popping their gum. I realized this when I spoke to some other people about exiting the front of the bus (a big one for me). They felt it was closer to where they were going and it didn’t cause that much of an issue.

Surprisingly, moving to the front of the bus and taking their time walking down the steps to gradually alight onto the sidewalk was not being done just to bother me. I think that’s important to note: I imagine that this person knows how upset I am and is choosing to do this behavior anyway.

Sure, that’s true at times: I remember a guy shaking out an irregular, internal beat with the Tic Tacs in his hand. I glared at him thinking that if I brought to my face that stare my mother used to use then he would be shamed into stopping. The guy looked right at me and shook them louder while he laughed. Clearly he didn’t know my mom.

Getting the Power Back

Tic Tac guy aside, most people discover that they often presuppose other people’s motives in order to justify the feelings they are already having about these pet peeves. Even if the bus people weren’t thinking of screwing with me, they were, at the very least, incredibly inconsiderate because they only thought about their needs, right? Unfortunately, while this reasoning may allow me to be ‘right’ in my head, it usually only ends up infuriating me more.

It can be much more relaxing and relieving to focus on what I can control:

I can control how I choose to think about this situation and sometimes that can alter how I’m feeling.

But, you see, now we’re getting somewhere. Sure, sometimes the pet peeve is just a pet peeve (to quote the old man with the cigar), but if it’s bringing up that much rage for you—if you can sense that that inner boy or girl still deeply feels that powerless and anger—then it’s a signal that you have something to work with.

You May Be Right, but Does That Make You Feel Any Better?

No, dude should not be popping his gum and that lady should DEFINITELY not be clipping her nails while sitting next to me on the F train. Yes, I can confront these people and take my control back. Yes, I can rally the subway car to help me confront them. Yes, I can leave and go somewhere else stewing and feeling defeated once again.

Or I can use it as an opportunity to figure out why something that is not so terrible when compared with the horrors in the rest of the world is touching on such rage in me. If I can do that, then I AM taking the control back. I am seeking for my own power.

And that Tic Tac guy can just become the stuff of blog posts for me to work out my own feelings.