Aggressiveness and Humanity: “The Word for World is Forest”

Imagine that aggressive violence was never in your consciousness.

Imagine you settled disputes through all kinds of other methods. Anger and rage, even acts of self-defense would be different because you’d be in a world where violence was just never an option. By anyone.

This is part of the premise of Ursula K. Le Guin’s short novel The Word for World is Forest. Humans, or yumens, have been colonizing another planet and have enslaved the Athsheans. The creechies, which the humans have renamed the Athsheans, were easy to enslave as they are a docile species. But torture, physical assault, and rape have unleashed an aggressive 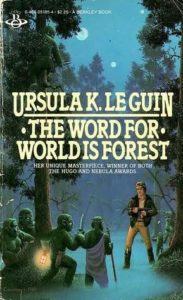 violence that the Athsheans didn’t realize was part of them. They learned it from the humans. And while they use it for self-defense and for justifiable means, the question remains: if they rid themselves of their violent enemy will they be able to return to their peaceful ways?

Early on Sigmund Freud believed that we have two drives that all our thoughts and actions can be reduced to: libido and aggression. Libido was mostly about sex, but could be interpreted as love or anything that had a positive drive: helping an elderly lady across the street doesn’t necessarily indicate lust, but altruistic feelings would fall in the libido category. Aggression was at the heart of everything else.

There aren’t that many Drive Theorists still among us, but the theory is intriguing. What happens when we reduce motivation to these two energy sources? Our judgment of good and bad people would not be about intentions–we all have the same intrinsic drives, to murder or to have sex–but we’d be held responsible for our abilities to hold those darker desires in check.

Therapy, particularly relational therapies, help with impulsive behavior, but use the therapeutic relationship to examine those impulsive feelings. For example, anger, even just a spark, at your therapist for, say, ending a session is best talked about. This way the feeling isn’t ignored or acted upon–the usual responses in everyday life.

Many people still believe that we, especially men, have an innate violent aggressiveness. They look at sports and even stereotypical boys playing together and point to that as evidence. There’s plenty of conflicting studies on this, but nothing can point to an innate violence that just happens to connect with a Y chromosome.

In Le Guin’s thought experiment the aggressive impulse, if it’s even there, is removed. So for all those people that feel that men are violent by nature, the question is becomes: by removing aggression do we still have a man? How do we define masculinity and manliness without aggression?

Interested in exploring more? Feel free to give me a call or email me here and we can discuss how you can better understand your own aggression.