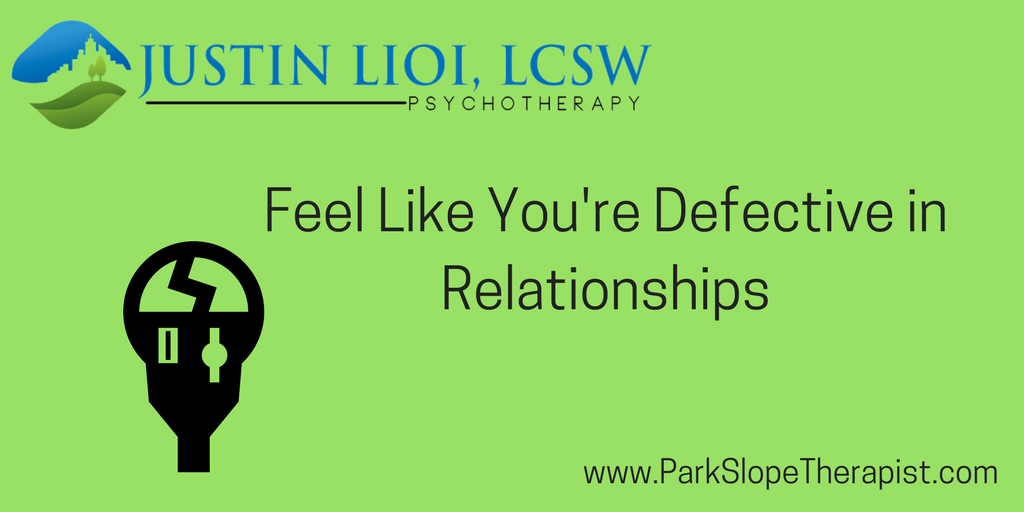 Think you’re defective in relationships? Well, it’s easy to get to feeling that way. With all the ghosting people do—maybe even you’ve done–with the unwanted stuff that even the best relationship brings up, with the fear of sex, of settling, and proving your sense of worth, it feels like there’s a lot at stake and, well, you’ve tried, but you’re worried your just not made of the right stuff.

At least that’s how you feel.

And if you feel that way it’s doubly hard to actually be in a relationship that isn’t defective.

What are your expectations when you’re beginning a new relationship, or maybe just when you decide to start putting out feelers into the dating world again? Do you show up on a first date with a marriage mindset? This doesn’t give you a chance to get to know the person—you’re getting to know the hopes and dreams you have for them. It’s basically doomed before you’ve told your best funny, yet self-deprecating story.

It’s easy to say “go slow”, but it’s harder to do that in your head. You might promise yourself you’re not going to be exclusive until the third month, but in your mind you’re bringing this person to your nephew’s Bar Mitzvah.

Play a game with yourself where you set different expectations on the first, fourth, or tenth date—this isn’t the “one” (yet!) they’re just someone that you’re going to get to know.

We all have things that set us off about people and we need to be aware which things are good triggers that alert us to ‘red flags’ (eg., being a jerk to the wait staff) and which are more a signal that we have some of our own work to do.

We learn a lot about ourselves in relationship to others. Some of this comes up in friendship or in work relationships, but in the intimacy of a romantic relationship we begin to see some very primal stuff.

All these things, taken to extreme, sure, could be red flags, but usually they are just some compromises that both parties make while being in a relationship.

If you’re feeling like you’re defective in relationships take a look at patterns in your previous dating experiences. Was there something (or a few somethings) that made you upset and may have had a part in your ending the relationship?

Allow Yourself to Be Surprised

When you can get out of your own way and reduce how overwhelming it all is it’s amazing the people you meet. You’ll meet a lot you don’t want to date, but you’ll be able to see them more fully. You won’t see them as someone who has to fit certain parameters to be a great partner and you’ll be able to see what you want to work on for yourself and feel less defective in relationships.

For a great relationship to take root you should allow yourself to be surprised.

If you still struggle with connecting and getting out of your own way, please contact me and we’ll set up a FREE 15-minute consultation to see if working together would be helpful.