So You and Your Partner Have Different Parenting Styles? Here's the First Step to Successful Co-Parenting | Justin Lioi, LCSW - Brooklyn, NY

So You and Your Partner Have Different Parenting Styles? Here’s the First Step to Successful Co-Parenting 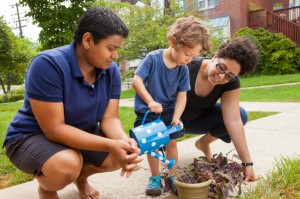 Sure there are some shared tasks and a division of labor that can happen if both partners communicate and remain flexible. (Remember, nothing tests perfectionism like a two-year-old). But even if the two of you figure out who makes the most sense to have drop the kids off at day care or prepare lunch the night before, conflict can still arise.

Everyone’s Got an Opinion

As you probably know by now, the many choices you make as a parent are constantly up for scrutiny by everyone else. That’s especially true when you’re not asking for advice. Everyone has an opinion on how to raise your child. Everyone from your mother-in-law to your neighbor to the person sitting near you in the cafe. People with children, without children, with PhD’s in child development. Maybe even some blogging therapists…

Most people secretly think they know how to parent until they have kids. Admit it, there was a part of you that thought, “I got this.” There’s good reason for this, though, because we were all children and are experts on what our parents did wrong (and some of the stuff they got right, too, I’m sure.) The problem is that you and your co-parent know how you should have been raised and may have been making silent declarations your whole life about what will be different when you’re the parent. Trouble is, your kid isn’t you and your co-parent’s got his/her own ideas.

What We Took In, What We Send Out

Some who might describe their childhood as “hard” feel that if they had to go through something, so should their child. I had a friend in college with, well, one of those unfortunate names. First and last. But this guy was hell bent that when he had children they were going to have the same name. If he had to endure it, then by gosh, so would they.

Others, and by and large these are often the parents in my office seeking help, look at their childhood, look at how they were parented and say, “Nope, that’s not going to happen. That’s not going to be me.” Yet because those parenting impressions are so deep they struggle with making different choices when it comes to the day to day of parenting. Especially when you’re angry, tired, annoyed, frustrated, and worried to death that you’re doing it all wrong. Those are the times that you catch yourself becoming your mother or father.

While no one was given a parenting manual, there was certainly a model passed down to us and those lessons go to the bone. It’s what can make co-parenting with a partner incredibly difficult. Two people from two different families with different rules and norms are coming together to raise a whole other being. If it wasn’t so common it sounds like it would make a riveting reality show.

How You Made Decisions as a Couple Pre-Parenting

One of the first questions I ask parents is how they make decisions as a couple. Decisions like the ones above about child care responsibilities, but even more so decisions before children were in the picture. How did these things usually go? Who decided where you were going on dates? How did you figure out whose family to spend Thanksgiving with? And if one person “wins” in a given decision does the other end up resenting it or do they know that it all eventually evens out?

After exploring this we then look to see if these patterns stayed when children came or if there was a shift. Did parenting bring up a new found strength in one person and did this diminish the other?

We don’t always even get to the kid.

Traditionally there are four types of parenting styles:

There’s much more to it than that and I can expand these styles in future posts, but the first step is for you to just think about how you were parented before jumping into deciphering your parenting style. What was your experience growing up and how’d you like it? Talk to your partner about what their experience was, what they thought about it, and how they felt about it. This will let you both have a bit more empathy for where the other person is coming from so you can stop judging each other and make some compromises.

Because then we talk about the kid. Then we start exploring temperament. It’s three dimensional chess once we get there so hold on tight.

If you need some support sorting out these different parenting styles with or without your partner please don’t hesitate to reach out. I’ve worked with many families over the years and even divorced parents who are still co-parenting can benefit from understanding where each other’s decisions are coming from.