Do You Know What Kind of Dad You'd Like to Be? - Justin Lioi, LCSW - Brooklyn, NY

Do You Know What Kind of Dad You’d Like to Be? 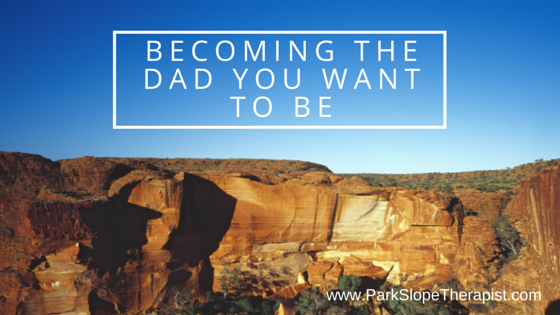 There is a space in between the fathers who read every new book on “How to Parent Your Child” as if these were competing versions of Holy Scripture and the people who disdain anyone who seeks external information on this most human act of raising a child. Yet the role of the dad has changed so much–and continues to shift.

I get it, men have been having kids for a long time. It predates the printing press and certainly the internet. Some people totally reject the idea of reading up on it or seeking help before there are legitimate issues.

Still the space that I’m talking about means that there’s the possibility of not making yourself crazy with all the parenting fads that are out there, but still taking time to know just what you’re getting into and figuring out the father that you want to be. I call this Intentional Parenting and it can inform you as you’re writing your own version of “How to Parent Your Child.”

It’s not parenting that is somehow all planned out, but it’s making sure that when you’re parenting you’re the one who’s parenting. Part of that is knowing yourself, especially knowing your temperament.

If we don’t take the time to examine the parenting messages we have been given by our parents we will wake up one day to realize that we aren’t parenting our kids: our parents are parenting them. How to parent is “instinctual” only if we realize that we are following the ingrained pattern set down by our own mom, dad, or whoever was the major caregiver. We’re either doing what they did or we’re rejecting it and doing the opposite of what they did. Everyone is grappling with this, including some great writers on fatherhood.

Either way, our parenting is in reaction to how we were parented as opposed to being an actual choice on our part of how we want to parent.

It’s an important distinction and one that I explore further in an article I wrote for GoodTherapy called Figuring Out Fatherhood: What Kind of Dad Do You Want to Be?

Parenting is an individual act because there’s never been a You before and there’s never been a Your Kid before either. Many parenting books (and blogs) forget that. The reason no one’s written the be all and end all parenting manual is because it’s not as if there’s this one product that’s only distinct from the others by its serial number. And really, would you want someone telling you how to parent your child? 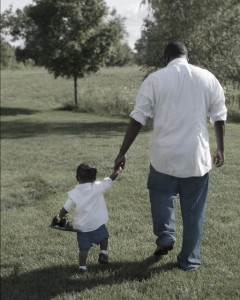 Sure your son may remind you of his uncle and your daughter may be your grandmother in many ways. But there’s more. And if we forget that we’re not seeing the whole child.

A stark example is taken from some of my work with families with divorced parents:

When a child reminds a father of the spouse who wronged him he can have a very difficult time separating this from his parenting. Without realizing it the father can become rejecting or work so hard to mask the pain that they appear to be overly caring. Either way he stops seeing the child as his or her unique self and more as a version of his ex. The child picks up on this inauthenticity as the dad unconsciously works to ensure that no one, including his child, sees his anger and hurt. It’s very confusing for a child to not be seen as their whole being.

No matter what you’re teaching your child, your strongest lessons are going to be their observations of you in the world, or, as we say, you’re always modeling.

In my article I focus on making strong intentions as a parent, specifically as a father. This doesn’t mean you’re planning everything out (good luck with that. To paraphrase someone: if you want to make the parenting gods laugh, tell them your plans), but it means you are learning to be the father that you want to be. Not just what was passed down to you.

You can find the article here:

Figuring Out Fatherhood: What Kind of Dad Do You Want to Be?

Let me know what you think in the comments section and if you’re interested in talking one-on-one please drop me a line here.