We Don’t Talk Enough About Money and Therapy (Part II) 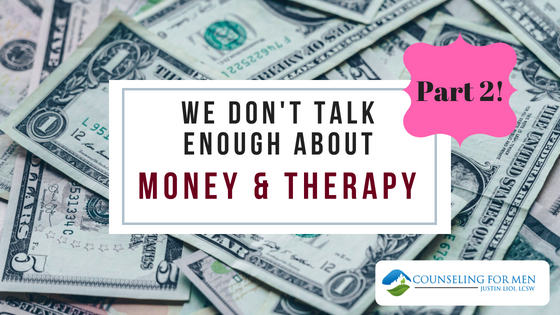 In my last post I spoke about how therapists and clients don’t talk often enough about money and therapy, particularly within the therapy and how money is a dynamic between the client and therapist. It’s something that too often goes unspoken, but can be a fruitful place to talk about anger and shame…along with some other feelings.

With this post, I want to talk about how money–especially if we don’t talk about it–can play a damaging role in our lives and can affect our relationships.

Talking About Money and Therapy

Money, the lack of it and the abundance of it, is a fruitful place for feelings to hide. Particularly when we begin to explore family of origin issues and how money played a role in our families when we were growing up.

Money, for many families, is a container. We’ve all heard the stereotype of the parent who showed their love by buying gifts instead of saying “I love you”. It’s such a weighty issue because most of us, kids or not, love getting things. We like when someone spends money on us. But if it’s not giving us all we want and need, it can be very difficult to say that to the giver.

We don’t want the things to disappear, but we want more than just the things.

Using money in the place of expressing feelings encourages the other person to bottle up their emotions. It can lead to people being judged by what salary they make and what they can buy.

Grief can get lost in money very easily.

Guilt can be contained in money.

Money can be used to ward off someone’s anger.

And if we let money do that, we avoid the feeling, and while we may “get away” with not experiencing the negative feeling in the moment, we may rob others of the chance to express their feelings as well. We may give the message that their feelings don’t matter because…money should make up for it.

Our History with Money Can Affect Our Present Relationships

We need to examine how we use money in our lives, with friends, family, and otherwise.

Lacking money, as a child or an adult, can be a cause of great shame. Sometimes worse than our own shame is remembering the shame of our parents if they weren’t able to take us on a big vacation or buy us the thing we told them every other kid had.

We may not have known it at time (although, we probably were pretty aware of something), but I’ve heard many clients talk about the guilt they carry as adults because of a childhood memory where they pointed out their parents not being able to afford to buy them something. They spend their time now blaming themselves, but we can reverse this shame/guilt filtering if we are able to move through the idea of money as the measure of our self-worth.

But to do so, we’ll need to talk about it.

We’ll need to discuss how it feels to spend money for therapy. Which is probably taking money away from somewhere else.

To talk about how giving money (to a friend, to charity, to a cause) may be a wonderful act, but may also be doing the emotional heavy lifting while allowing you to avoid feeling guilty for what you have or for not doing more for that cause or charity.

Gender, race, class, age—you name the ism and money is a part of it.

And I think it deserves to be explored.

If you are interested in talking further, you can contact me to see how we can work together.