Can You Distinguish Between a "Good" Man & a "Real" Man? - Justin Lioi, LCSW - Brooklyn, NY

Can You Distinguish Between a “Good” Man & a “Real” Man? 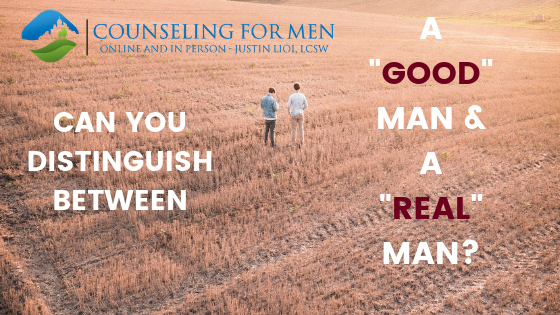 There’s an ongoing conversation about what a Man is, what a Man should be, and whether we’re coming up with a whole new definition or just making some tweaks to the old one. Real Man/Good Man–is there a difference?

When I run workshops and ask people to talk about stereotypes and beliefs about men, I’m rarely surprised by the answers. We, by and large, have a similar sense of how guys are perceived in society and what’s expected of us.

It’s why shame works so well to keep us silent, to stop us from expressing ourselves, and from truly finding equal partnership with women and the trans community.

But it doesn’t take much prompting to find out we know a lot more. We know what kind of men we really want to be and the kind of men we respect and want to emulate. We can set those stereotypes aside if we can move through that shame, collectively, because what it’s going to take is an ability to connect with others–both men and women–in a different, more fulfilling way.

I go into this further in my column at The Good Men Project called How the Masculine Police Label “Real Men” vs. “Good Men”.

Looking forward to hearing what you think! Feel free to contact me if you were interested in learning how we could work together.