3 Steps Toward Being in Charge of My Anger | Justin Lioi, LCSW - Brooklyn, NY

3 Steps Toward Being in Charge of My Anger 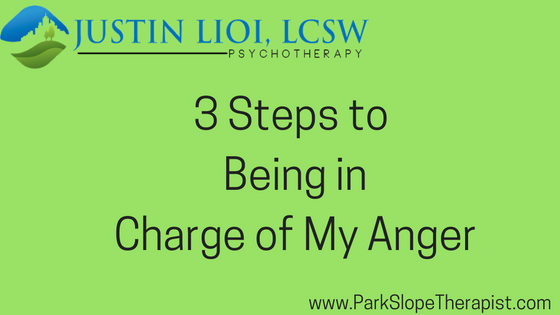 There’s a difference between a healthy feeling of anger and an unhealthy expression of that anger. Being in charge of my anger is about making sure the anger isn’t in control.

I want to jump in and quash the idea that people shouldn’t get angry. There’s a lot going on in our lives and not being angry every once in a while would be worrisome and unhealthy. Anger is a proper response to injustice, whether being cut in line at the deli, or being denied one’s basic human rights.

While I’m on a quashing roll, there’s also no real anger control, just like there’s no sadness, happiness, or guilt control. We don’t learn how to control or even manage our emotions, we learn to feel them fully so they don’t control how we express them. We stop them from running our lives. Denying them, or thinking we can have full power over them, just doesn’t work. Trying to control a feeling takes a lot of energy, and the feeling ends up coming out somewhere else. The guy that never gets sad, never is afraid? There’s usually an irritability in there, there’s a headache–or worse.

Being in Charge of My Anger (Without Being In Control)

Anger can be a powerful motivating energy, but to be helpful, you still need to be “in charge”. If you’re unable to direct it toward something positive, it can get you in trouble.

Many people I work with are afraid of their anger. Afraid what it will do to others and how dangerous it could be to themselves. Afraid of the retaliation if they let that anger out. We need to learn how to express it in a place and with people who can handle it. Being in charge of my anger means I need to know my anger and how it sits in my body.

3 Steps to Being in Charge

Becoming more connected with your anger may allow you to fully express it without that destruction. It’s not necessary for your anger to be destructive in order for you to feel that it is fully expressed.

This is hard for some guys to do, especially when anger is the only emotion in their feeling vocabulary. Maybe you’ve been trying to hold it all in–or you’re concerned that if you don’t let it all out you’re not going to be true to who you are. Please don’t hesitate to get in contact if you’d like to talk about this further. As weird as it may sound, you can learn to be in charge without having to be in control.