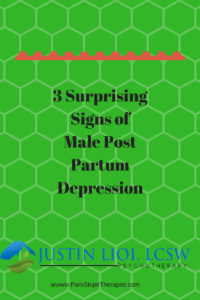 Paternal post partum depression may not seem to make much sense to many people.

I mean, it took forever for most to accept the idea of PPD in mothers. Some still struggle with this idea. And the idea of depression at all in men is difficult to get some people’s head around because it doesn’t always appear as what we’ve been told depression “looks” like.

Early in 2016 a study was released that explored how the father-to-be’s depression (and they discussed the different ways they measured this) was correlated to premature birth. The “why’s” of this are still unknown, but there were specific physical issues, such as the health and count of the sperm, which were significantly affected by a dad or dad-to-be’s depression.

I start out with that study because it’s important to note that how we carry ourselves, how we express ourselves, and just basically who we are in the world has a profound effect on other people. Sometimes that other person is an infant. Several clients over the years, particularly parents, would not have sought help or support unless they were doing it for someone else’s benefits–usually their child’s.

A few weeks ago I gave a talk at Fusion Academy in Brooklyn with Nora Winters. We were discussing what we’ve come to call Intentional Parenting. This is when we make parenting choices that are grounded in our core values, yet flexible enough to fit our particular child. The first step, as the old Greek said, is to Know Thyself.

If you know yourself, whether by Intentional Parenting or just Intentional Human-ness, you’ll be more able to identify dark feelings. If you can do that you’re much closer to taking care of them so they don’t end up taking care of you.

Depression in men, even paternal post partum depression, may not look like how we’ve all come to think about depression.

You’re probably thinking about a guy who can’t get out of bed, mopey, maybe even crying. Perhaps you’d never describe yourself with any of those words. The thing is, the signs for paternal post partum depression, could be different.

Irritability
Depression and sadness may be more visible as a “bad mood.” You might be grumpier than you usually are or snap a little more towards people you love. You might have a quick cutting retort that in retrospect wasn’t called for and may have been fairly hurtful. You may end up in even more trouble. You might find yourself being a bit more passive aggressive such as waiting longer than you needed to respond to that text when you knew someone was waiting. Your sarcasm may be at an all time high.

Distancing
Men who are not aware they may be dealing with paternal post partum depression may find themselves having a lot more to take care of at the office than they usually do. Suddenly, things got so busy that you just can’t make it home in time for anything. Guys may start an affair or stay out drinking or smoking pot more often. Anything that keeps them out of the home for just a little bit longer. The challenge is that you might not even realize that you are doing this to cope. These behaviors and more that take you away–whether by actual distance or in your head–are unhealthy ways of adapting to a situation, and could place your safety, your child’s safety, and your relationship at significant risk.

Aggression
We men often think that if we are strong enough, loud enough, and can punch hard enough no one will notice that we’re actually suffering. It’s easy to see this in the swaggering teen who’s not going to let you know how upset he is that his grandmother died last week, but this way of managing sadness can still be an (unhelpful and unhealthy) option for the adult male. And it makes sense because physicalizing feelings, say, punching a wall, definitely helps in that moment. But like the distancing behaviors, that short term solution could have some dire consequences in both your work life and personal life.

Getting Support Without Becoming a “Weird” Diagnosis

paternal post partum depression, or any depression in men, can be present in each of these behaviors and feelings. Here’s the thing, though. If you don’t want to call it that, if saying “I think I may have paternal post partum depression” is not something you’re ready to have come out of your mouth, it doesn’t mean you can’t get some support. Professional support is not always about slapping on a diagnosis and calling it a day. If it were that simple then we’d have one way of working with every person who’s diagnosed with X issue.

Lots of factors go into where your issue stems from and just as many factors are at play when it comes to treating you. I mention Irritability, Distancing, and Aggression in the context of paternal post partum depression because it can give some people a context. It can ground you and help you understand why you might be feeling this particular way at this particular time.

It’s not meant to shoehorn you or demean you, or to belittle anything else that may be going on in your life that’s giving you stress. There are certain factors that may make paternal post partum depression more likely to arise, but that’s another post. What’s important is that if your partner has just had a baby or is expecting one, and you’re seeing these behaviors, you don’t have to stuff it in, you don’t have to go it alone.

Click here if you’d like some healthy ideas for managing this. I’ve put together a PDF of a few tips that dads and dads-to-be have found helpful.

Or maybe you want some personalized help right now. No problem. Contact me here for a free 15 minute consultation to discuss whether you’d benefit from sitting down and talking right now so this doesn’t have to be hanging over you throughout fatherhood.