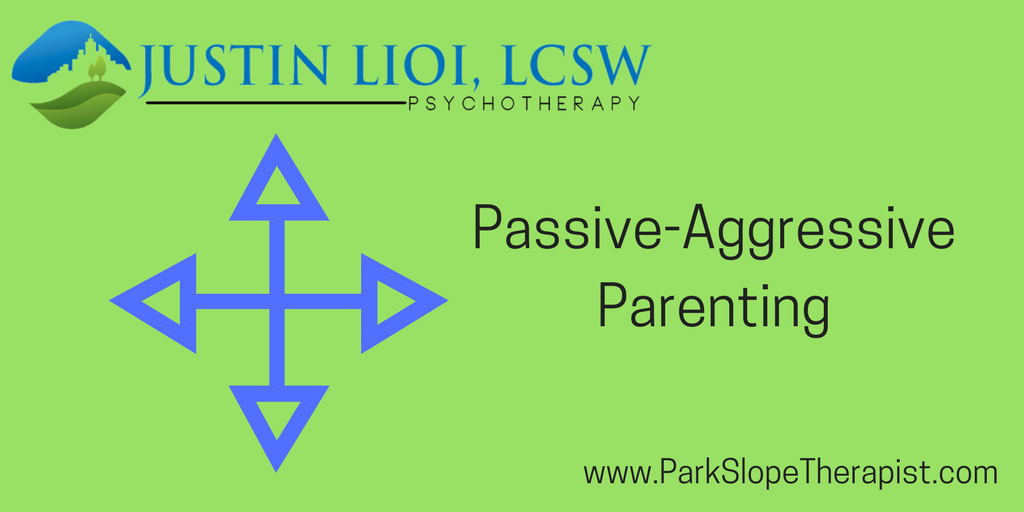 Put them together and what do you get?

Passive-aggressiveness can be a powerful form of manipulation and it’s also quite insidious as it can be harder to pin down and hold someone accountable for. There’re no “Passive-Aggressive Classes” as there are for “Anger Management”.

Sarcasm is a version of this. It’s a way to say something biting and cutting while being able to also say, “But I was just kidding!” if you end up getting called out on it. You can say to someone, “You misunderstood my intent” (as if that were all that mattered.)

What passive-aggressiveness does is give you a temporary feeling of triumph while everyone else gets a simmering resentment. Now put a baby in the middle of this and things have really taken a turn. You don’t need a degree in mental health to know that isn’t a great foundation for a relationship, parent or partner.

I put “chosen” in quotes because it’s probably not something we realize we’re choosing to do. If we’re known as a sarcastic person it’s probably because that’s been our line of defense for a while and after some time it’s been habitualized to how we express our aggression. Still, if it’s something we want to change, we can become more aware of how often we resort to being passive-aggressive instead of just saying how we feel. Bringing it into awareness gives us that choice.

Once we start to notice our passive-aggressive parenting we can try to learn when and why we pull it out. Often, we want to avoid the danger that aggressive-aggression can be or can lead to. Sometimes we don’t really want to have the confrontation, we just want the person to know that we’re angry, that we’re on to them, and that we’re displeased.

Early on in the life of new parents, there are plenty of possible reasons to get into a fight. Many arguments are simmering. There can be snapping and scarce patience because you’re operating on barely any sleep, there are constant shifting demands from a new baby, and quite possibly a lack of emotional connection with the person who is/was your main emotional support.

The problem is, if you don’t directly say how you’re feeling, your baby can be the passive vehicle for your passive-aggressive parenting.

Here’s the situation (and, heads up, this example is going to be very heteronormative): Dad has never changed a diaper before Junior arrived and he is understandably nervous about this. He’s doing his best, but he’s making some first-timer mistakes such as

This can happen when there’s one parent with a steeper learning curve than the other and often, stereotypically, that’s dad.

Dad changes Junior and a few minutes later he overhears his partner say to the baby in a sing-song voice:

“Daddy didn’t get the diaper right again, did he? Oh, my goodness.”

Or some version of that.

That’s not meant for Junior, that’s meant for dad. Even if the partner didn’t know dad was listening. Mom is angry that she has to redo the diaper. She’s told dad again and again. Why can’t he get it right? Why does she have to double check everything he does!?

Dad may not be direct in how he feels either. He may just decide to stay longer and longer at work since everything he does is second guessed. Maybe he’ll ignore the first three times he’s called upon to help and then be told he never listens.

Slowly but surely, Junior will become the real victim in this passive-aggressive parenting non-expression of feelings because he’s soaking up one of his first life lessons: how you treat each other.

A Way Out By Trusting

Did you learn to fight before the baby came? Was this sarcasm, ignoring, passive-aggressiveness part of your relationship since the early days? That’s fine, if that’s the relationship you both want. It’s less fine now, though, since a third party has entered into the family dynamic.

Discuss with your partner just how you want to be able to communicate together. Remember that everything—everything—affects the baby in some way. I’m not saying this to make you so anxious you can’t say anything, but don’t discount the effect that the emotion in the room has on your child. Often, I’m told by parents of much older kids about something traumatic that happened in the early days and they say, “But he doesn’t remember” or “She was only an infant, she wasn’t aware of anything.”

Not so. Your child is sopping up that emotional energy and it’s how you respond to it that will make things easier or more challenging for them. I knew someone who was well-enough attuned to his baby to note that their sleep patterns changed when his father-in-law was visiting and could connect this to the greater tension between he and his wife during the stay.

Shouting all the time and actual aggressiveness is, of course, not the answer either, but finding a way to communicate in a direct manner can help. Trusting each other enough to be vulnerable regarding your parental insecurities can go a long way.

Of course, if these weren’t in place before the baby, you may be struggling to create them now and passive-aggressive parenting seem like it’s the only way to go, but it’s not. If you’re looking for some support, please get in touch and we can talk about what is getting in the way of you being the parent you want to be.