What Keeps You Stuck and Afraid to Make Decisions?

I’m often a pretty cautious person. I like to know as much as I can before committing to something and am reluctant to jump into something too soon. I’ve felt that this can be a pretty smart way to go about making choices—getting all the facts together, weighing pros and cons, allowing for time to reduce overly impulsive acts. Some people, though, may get so caught up in this that they are afraid to make decisions.

Jane Addams has a whole chapter in Twenty Years at Hull House that she titled ‘The Snare of Preparation’ which she took from Tolstoy and the phrase is such a great description for what can happen to people when they are so focused on getting ready: they often feel they never are. Which means that they never do what they want to do.

Two adages we’ll see on a meme every now and then are:

“If you fail to plan you plan to fail”

If these phrases conjure up the inspirational sayings hanging on our elementary school bulletin boards (maybe with a picture of a frog or hummingbird) we may be struck with anxiety and afraid to make decisions. And by struck I mean paralyzed.

See, the problem with too much planning is that it can lead to over-thinking a situation.

Then we’re caught. Caught and trapped by our own thoughts that may circle around and around, without ever settling on anything.

If you’ve been watching House of Cards (if you wanted to feel even more cynical about politics, this is the show to watch, by the way) we’re let in to Kevin Spacey’s planning and manipulation of others for his own ambition.

Here is a man that rarely gets trapped in over-thinking something. He analyses a situation from every perspective, but then decisively acts.

Of course, being a sociopath is probably helpful here, but the point is, he can often do the good prep work without getting so caught up that he doesn’t move. He moves. Like a mako shark.

Con artists, whether politicians or not, have this talent as well, but it doesn’t all have to be negative.

Put Leverage in your Netflix queue and watch how that team does the same thing as Representative/VP/President Underwood (no big spoiler there) except they are more Robin Hood-like. Any David Mamet movie or heist movie can give examples of people who plan and act. As well as not getting bogged down with over-thinking when the plan doesn’t go as planned.

Jane Addams, me, and many others just get too caught up, but being afraid to make decisions doesn’t mean you’re a nicer person. It just means you’re not making decisions.

Most clients don’t come to me with the goal of treatment to be Secretary of State. Still, I’m often talking to people who don’t know how to take steps to get a new job, deal with stress, to decide on whether to have a child, to figure out when they should or if they should get married—basically these decisions are how to move out of their unhappy yet comfortable status quo because…

Oh, the “becauses”…there are so many good reasons why people don’t make change. But they are often unaware that a big piece of this is because they are not in touch with the emotions involved in making a change. 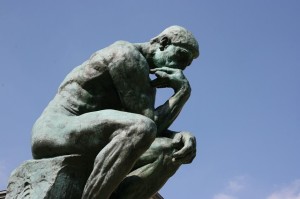 Good, smart, cerebral people will ruminate, perseverate, or as my 4th grade teacher used to say: “dilly dally,” about these decisions thinking all the time that they aren’t afraid to make decisions, they are just putting some good thought in to it.

But they’re left entrenched in a situation they are claiming they want to change.

No judgment here because I get it, but being stuck in the snare of preparation can be an indication that we are over-thinking. There’s a sense that I’m not ready now, but if I take one more class, read up a bit more, think through another possibility, weigh more risks, then I’ll be ready.

There are some of us who will not benefit from this post because you’re actually fairly impulsive. You go where angels fear to tread and dive in, you “Just Do It”. You may need some help in slowing down.

You also may be what the over-thinking person is guarding against; making rash purchases, jumping in before you have all the facts, planning to fail because of your, well, you know the phrase by now.

Because planning is a great idea. It’s important to take that class, read those books, know the costs and benefits before making a move, taking a job, getting married or having a kid.

The problem lies in when the over-thinking is a pattern. Is every major decision put off for months and months, maybe years, because you never feel ready? Then you’ll probably benefit from examining the feelings that your over-thinking is covering up.

If you’re over-preparing, ask yourself this question:

What would need to happen for me to know that I’m ready?

Force yourself to get very concrete here. What would your best friend notice differently about you when you were ready to step out of prep mode? Remove negative words from your answers. For example, “I wouldn’t be so scared” could become “I’d be excited”. And to get more specific, if you knew you were ready then you’d “be excited to go to work in the morning and my best friend/spouse/cat would notice that I’m smiling more, that I have more energy, and that I am giving them more attention.”

Often we have a very amorphous idea of what it will feel like to be ready. Make that idea more concrete and you may find yourself finally moving forward.

Because you may never feel ready. You may need to learn to trust the prep work you’ve done, the research, the talking to others, the whatever it is you’ve put into this decision and take a step. It’s not exactly a blind leap, but it may be a little hop. It’s a risk, sure, and maybe it’ll be helpful to have an exit strategy, but don’t get hung up on that if it’s one more thing that keeps you where you are.

Perhaps realizing that failing is an option, and that it won’t destroy you if you don’t let, it is a good way to go.

Mindfulness meditation and therapy can help to not avoid the anxietyfear that paralyses us. They give tools to acknowledge those feelings and learn from them without being hindered by them.

While the final decision must be yours in order for you to fully get out of the loop of being afraid to make decisions you don’t have to move through the full process alone. Take a look at your supports. Are they people that help you move forward or are they part of the paralysis?

Feel the anxietyfear. Welcome it, tell it that you have no intention of trying to destroy it, but that it’s getting in your way. Ask it if it has anything real to teach you, or is it just smoke and perception that is an all too familiar pattern that rises at every transition in your life to keep you paralyzed while it’s pretending to keep you safe.

Imagine the outcome in a positive, concrete way.

Trust the work you put into the decision and know that if you fail you’ll probably learn more than if you succeed.

If you continue to be stuck or want some support talking about this or another issue please don’t hesitate to contact me here.