I was having a conversation with a woman who was in a bad mood and was being very judgmental of herself for having the mood. I knew something about the judging self so I thought I could be helpful.

This woman had stepped away from everyone else and, being the nosy guy I am, I went over and asked if everything was ok.

She said she was feeling “bitchy” and thought it best for everyone if she stayed away from other people for a little while. 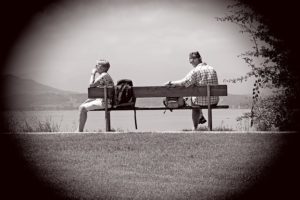 I appreciated this self-knowledge and self-understanding (also glad we weren’t being subjected to her bad mood), but then she added something else.

She was watching TV. It was showing some horrible news footage (is there any other kind?) of a flood and destruction. She spoke about how badly she felt that she could be in an irritated mood when things like that were taking place in the world.

Oh, you judging self…you just swoop in and take over.

Me v. The World

Does feeling upset lessen our ability to empathize with other world events? Does it get in the way of our doing anything to make the world a better place?

Of course it does.

While we’re irritated it’s very hard to take care of others. But that’s the point of acknowledging our own suffering, no matter what the reason is for that suffering.

Do you really want to be the best partner, parent, son, daughter, boss, employee you can be? Take a few minutes to feel bad and only then move on.

I thought I’d be smart while talking to this woman and quote (paraphrase) Victor Frankl’s Man’s Search for Meaning and said something about existential suffering, but it had no effect on this her. Neither did my assurance that she had the right to her no-good feeling, no matter what was going on in the world. I told her that diminishing her feeling doesn’t help her feel better. It just makes it worse. And doesn’t do much good for the world’s suffering either.

The Ugly Head of Pity

I think most of us grew up with the idea that one of the cardinal sins was self-pity. How many times had you heard someone say, “Don’t feel sorry for yourself!” Or as an accusation, “You there, sitting just feeling sorry for yourself. Let me get out a violin for your pity party.”

Feeling sorry for yourself was so self-indulgent. It was so me, me, me.

All of these phrases do so much to dampen the idea of learning self-compassion–of having empathy for yourself. Those things are too close to self-pity. No time for that.

(My post started with that woman because guys get called out for this all the time, but women feel it too.)

Sure, some people get stuck in the self-pity, but they probably have some other stuff going on that needs to be addressed. Being told to snap out of it or get up off the mat (choose your favorite cliche) is not going to be enough for people who are in the muck of it. But if you’re not in the muck, if you’re having an irritable day because your favorite character on Game of Thrones was killed off, then have your irritation. Notice the judgment that arises because you knew you shouldn’t have gotten attached to any GoT character. Let it work its way through you and then you can move on.

If you are getting stuck,

If you are feeling irritated by most things, most days,

If a self-pitying, sad, angry, scared, anxious feeling sticks around and is interfering with your life–then, get support. There’s probably something else underlying that and you can address it, you can take care of it. You don’t have to suffer with it.

So the feeling could be a sign that you should seek out some counseling or the feeling is a normal human reaction to something.

(Or it’s both, by the way. People seek counseling support to know themselves better. To become more of who they want to be. Counseling isn’t meant to pathologize you with a mental illness diagnosis. We just like helping people be more of who they are.) 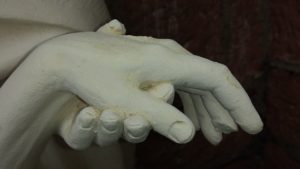 It’s good to not want to be a victim. It’s okay to feel like one for a little while.

If you’d like to talk through some of this stuff, whether you’re getting stuck in a feeling or a judgment, don’t hesitate to get in contact with me. You can also ask to be signed up for my mailing list so you have posts mailed directly to you.