Am I Broken? What Keeps Men Out of Therapy - Justin Lioi, LCSW - Brooklyn, NY

Am I Broken? What Keeps Men Out of Therapy 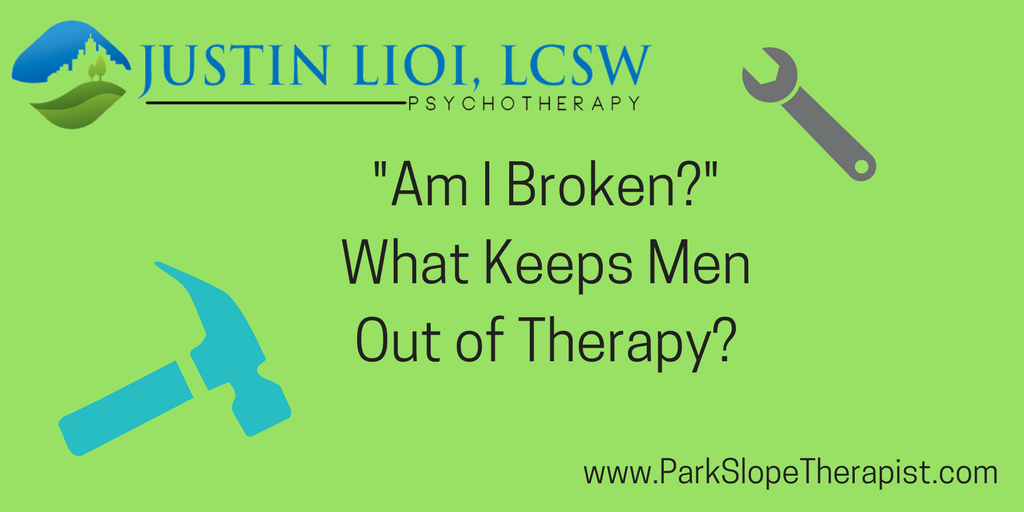 That question is scary: “Am I broken?”

The fear of being broken is powerful. One of the reasons you might be staying away from therapy is because you really don’t see hope of anything changing for the better. You’re stuck. You have the relationship that isn’t going to get better. You have the children that are a drain. You have the job you don’t like, but have to keep because of the aforementioned wife and children…

And you’re in this place because this is all that is possible for you. You’re broken and you’ve basically gotten what you deserve–ah, but you don’t fully believe THAT.

Deep down you know you deserve better. You should have better.

My point is, it comes out. Sooner or later, no matter how good you are at hiding this, that resentment, that sadness, that feeling that it’s all so goddamn unfair, leaks out.

This is the paradox that I often see, but is rarely talked about. Sometimes a client won’t truly recognize this until we’re deep into the treatment: that at the end of the day there is actually a fear that they are just not capable of making change. You’re afraid you’re broken.

That’s a big moment. Because you spend a lot of your life covering up vulnerable, uncomfortable feelings like that because if you truly believed that, it’d be devastating. It’d be failure.

It’s also freeing to put that fear on the table. It’s the root of a lot that is holding you back. Think about it: if you start with the fundamental belief that you can only go so far and you want to go much farther, then you can’t enjoy anything else along the way.

I’m saying You don’t have to be or feel stuck. I’m saying there are other possibilities for things you have not given yourself permission to enter your life.

It’s different for everyone, but I’ve worked with many guys who once they begin to see that they have choices, when they begin to get relief from the boxes they put themselves in (or they were put into after years of being shamed for trying to get out) they begin to have the life they want. Courage, assertiveness, and self confidence is gained. Powerful, overwhelming feelings that seem to be controlling their lives begin to have less power.

You can realize that the answer to the question, “Am I broken?” is really that you just haven’t allowed yourself to break out.

If you’re struggling to figure this all out on your own, please don’t hesitate to contact me for a free 15 minute consultation to see if counseling might be a good avenue for you to try.