Lack of Willpower in the Face of Old Habits 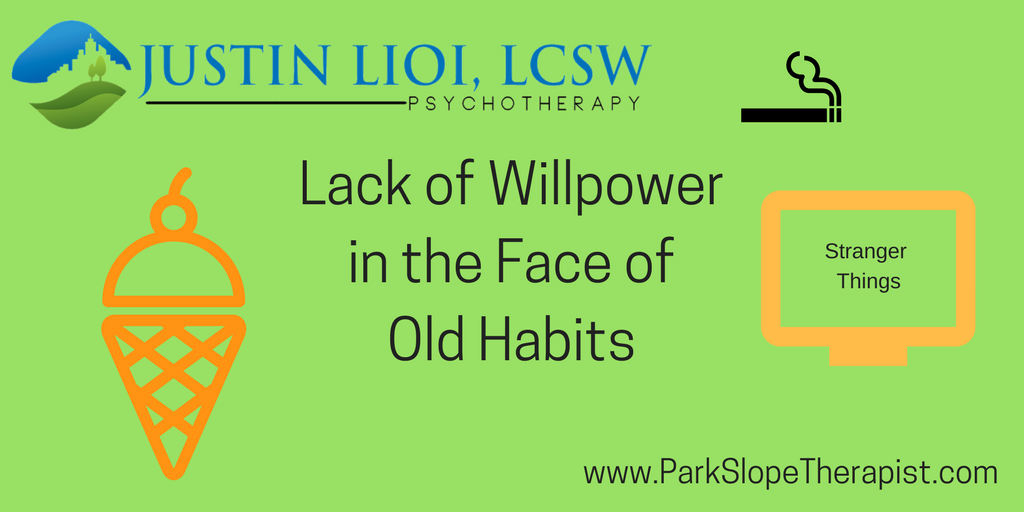 Self-judgment can be a killer. One place it shows up is in our lack of willpower. Willpower has such a claim on us. I don’t know, maybe it’s to do with our individuality. Our sense that a man can do anything without asking for help. We’re so proud of ourselves when we stop doing something due to our “willpower.”

The list goes on and on. And when we don’t get in to temptation we feel so proud.

So of course we have to feel terrible when we do give in. We failed. Big time.

Willpower always reminds me of constipation. Those times when you’ve had too much fiber, not enough water, and you’re pushing and squeezing until you force out what was needed.

I know, that’s graphic, but isn’t that how it feels sometimes when you just know you should turn off Stranger Things and write a blog post (but who else will care about Barbara if I don’t?)

My issue with this is we are always so gosh darn sure of ourselves and we think, If I can’t make it on my own then I don’t deserve it. We keep just going down and down the rabbit hole of self-flagellation instead of just asking for some help. Either I have the willpower, or I get what I deserve because I have a lack of willpower.

The Odyssey and the Lack of Willpower

Travel back to your first or second year of high school English class and re-read the twelfth book of The Odyssey. This is the one where Odysseus and his crew are told by Circe that if they hear the Sirens’ songs when they are at sea they will die. The singing will “transfix” and “spellbind” them causing them to be killed. Circe tells him to have his crew put wax in their ears so they don’t hear the song.

…if you are bent on hearing,
have them tie you hand and foot in the swift ship,
erect at the mast-block, lashed by ropes to the mast
so you can hear the Sirens’ song to your heart’s content.
But if you plead, commanding your men to set you free,
then they must lash you faster, rope on rope. (Odyssey, Book 12, 55-60. Fagles translation)

We live in the real world. We’re going to be tempted to do all sorts of things that don’t have as much pull as the Sirens’ song, but still are pretty damn strong.

Willpower is painful and, I think, we do ourselves a disservice when we don’t ask for a little help when a little help would go a long way. We can’t plan for every issue that may arise, but we know most of our triggers. We know that if we stop off at the local bar before going home then we may have more than one drink there. We know that we want to make meditation a daily habit, but if we turn on the TV as soon as we get home we’ll get sucked into something and then be too tired for mindfulness before bed.

Don’t rely on your willpower so much. It’s going to make you feel that YOU are a failure when the odds were not in your favor to begin with.

There are apps now that help you stop or start all kinds of things, but you can also find your own way. Years ago I wanted to read War and Peace. It was something I thought should be read and it was just too difficult to think about devoting that amount of time on one book to the exclusion of all else. So I made a point to get up fifteen minutes earlier every day and read ten pages every morning. It took me a good part of a year (some days I squeezed in more, some less), but I read the book and enjoyed it.

It was only by creating that habit and not squeezing out the novel as quickly as I could. I would have hated it–it would have felt like a punishment. And when I gave up around page 467 it would have made me feel bad about myself because of my lack of willpower.

How are you finding ways to create or break habits? Are you relying too much on willpower? Let me know in the comments below how this is working for you.