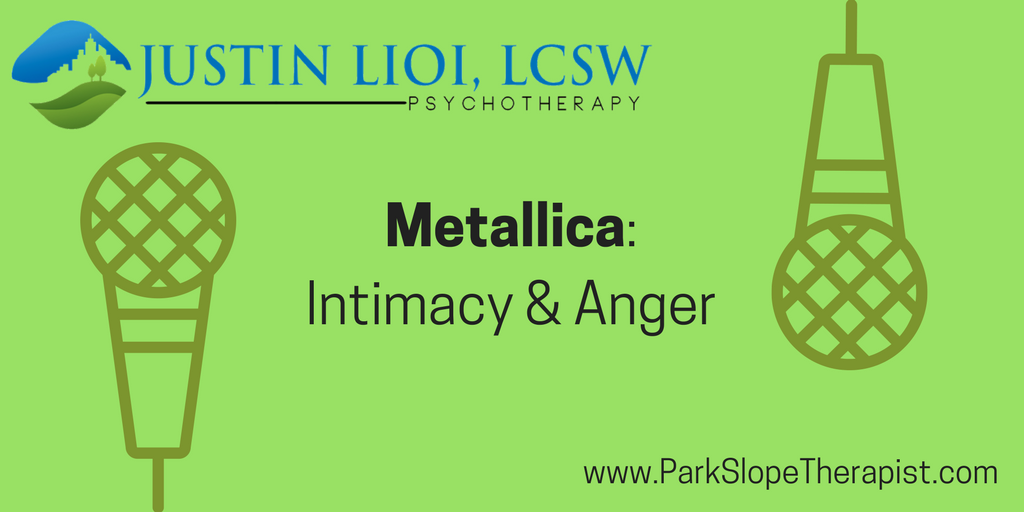 I recently re-watched Joe Berlinger & Bruce Sinofsky’s 2004 documentary Metallica: Some Kind of Monster. This was first recommended to me in grad school during a course on group therapy. In the film, the band Metallica is struggling with the loss of a band member and trying to put together a new album (eventually called St. Anger, if you’re a fan). The remaining members, Kirk Hammett, Lars Ulrich, & James Hetfield are also having some personality clashes. To deal with the clashes of intimacy and anger they decide to do what any normal, run-of-the-mill metal band would do in this situation: they hire a psychotherapist.

The masculinity of these guys is potent from the start of the film and their anger and egos are huge as well–and they know it! These, along with substance use and fatherhood, are some of the issues that get in the way of writing and putting out a new album.

Intimacy and Anger: The Place Between Avoidance & Aggression

Ulrich says toward the end how they proved they could make a gritty and angry metal album, but do it all with positive band energy. The conflicts were able to remain. They weren’t pushed away and avoided as we often do with conflict when we have a project to accomplish together. Also, their resentment and anger didn’t annihilate each other. There was yelling. There were people getting in each other’s faces and screaming, and there were people telling the therapist, Phil Towle, that he may be overstaying his welcome (similar thoughts were mentioned about the documentarians as well.)

Neither of those guys are leading particularly happy lives and they want to find a way to do something different. I do hear how often the aggressive guy particularly doesn’t want to lose his directness. It’s something he prides himself on.

The good news is he doesn’t have to. He needs to learn to be more aware of the strong feelings that are building up before they get so huge, though.

That means getting in better touch with the initial, usually more vulnerable, feelings that supersede some of the anger.

Sitting in the Mess of It

Metallica learned how to deal with the discomfort of intimacy and anger. Sometimes this was when they were feeling hurt by a bandmate putting down their lyric or when someone called something they did boring or lacking novelty. Not simply by tone policing each other, but by having someone say how they feel about this part of you and you saying how it felt to hear them say that, etc.

Hetfield particularly goes through a transformation as he leaves the band for a time while going into rehab. When his re-entry to the band requires that he only work between 11am and 4pm, there is some resentment and some people feel infringed upon. Intimacy and anger are on vivid display there.

And weirdly, these guys talk about it. Yell about it. And keep showing up for work.

And, spoiler alert, the band goes on. About ten years after this documentary they make another documentary.

This reminds me of families. I began my career working with families and occasionally do now, but more often I am working with an individual–but I never forget that they are part of a larger family system. Every family has it’s own rules and the people in that family fall into–or are placed into–particular roles. It takes strength and determination–or just exhaustion–for any part of that family system to begin to make change.

This Doesn’t Mean It’ll Be Perfect, but…

When we start to shift other people may or may not like it. And whichever they do, they are probably going to need to shift as well. At least to accommodate your shift. If you’re the guy that goes along with everything, and you start to put your needs out more people are going to react.

You think changing a habit is difficult? Many of those (not all, of course) are mostly in your control. Trying to change a way of being in the world, a way of being with other people–well, you’re upping the stakes now.

These guys face that though. Nothing’s perfect and it continues to be work that they need to do together. It’s possible that not all the members are always going to feel fully heard. And someone is always going to end up disappointment.

In your family, your friends, with your band, the important part is that there is enough trust and respect amongst everyone that you can get angry, you can feel let down, you can feel frustrated for no apparent reason–but you can put this out there. You can endure your feeling and you can sit with others’ reaction to it. It’s not living in Eden. It’s not Utopia. It’s not even Nirvana (haha, I couldn’t resist), but it’s family.

A family where no one feels they never get a chance to have their needs heard. No one feels they are completely left on their own. And no one needs to feel they can’t put their feelings out there.

Would love to know your thoughts on the doc if you’ve seen it. It’s currently streaming, so watch and let me know your your reactions to it, or any part of this post, in the comments below!